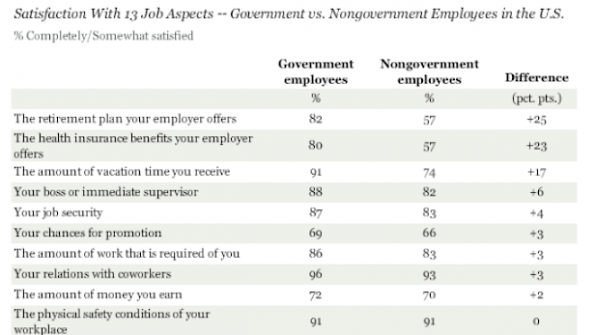 Government employees are more pleased with their retirement plans, health insurance and vacation benefits than private sector workers, according to a recent Gallup Work and Education poll.

According to the poll, only 57 percent of non-government employees were “completely” or “somewhat satisfied” with their retirement plans, but 82 percent of government workers voted that they were “completely” or “somewhat satisfied” with those benefits. Health insurance contentment showed a similar gap in private and public sector workers with 80 percent of government employees expressing satisfaction with their health insurance, and only 57 percent reporting satisfaction in the private sector.

Government benefits vary, but typically government workers have pension plans, which is rare in the private sector, according to the Gallup report. Those workers also have generous health plans that require lower out-of-pocket costs. Vacations, for instance in the case of public school faculty, may include entire summers off or guaranteed two to four week vacation benefits for other types of government workers.

Government and private sector employees did compare in their level of satisfaction in other aspects of the 13-point poll, such as their satisfaction with their immediate supervisor and the amount of money earned. The similarities in pay satisfaction are of note, since a federal advisory body found last year that, on average, federal government employees earn more than a third less than their private sector counterparts.

Nearly 3,000 employed adults in all 50 states and Washington, D.C., were surveyed though phone interviews between 2011 and 2015 for Gallup’s Work and Education poll.