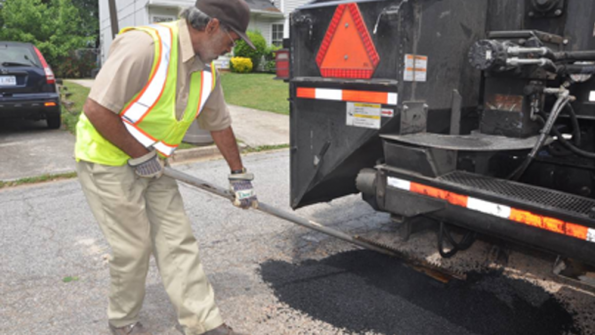 The Roads & Drainage Division in DeKalb County, Ga., has accelerated the pace of pothole repairs in the county. The division kicked off the annual Pothole Palooza intensive road infrastructure improvement campaign on April 1.

The Roads & Drainage Division in DeKalb County, Ga., has repaired more than 3,600 potholes and 13.84 miles of road so far in 2015. The data is current through mid-August. The division has more than doubled its output from the Jan. through May period when it patched more than 1,500 craters.

The pace of repair has been accelerating since DeKalb kicked off the annual Pothole Palooza intensive road infrastructure improvement campaign on April 1. The campaign, which ran through April 30, celebrated National County Government Month. More than 330 potholes were patched in the first two weeks of April, in spite of several downpours that delayed repair crews. The photo below on the left shows crews at work during Pothole Palooza. In 2014, county road crews set a record of 1,000 chuckholes patched in April.

The campaign offers an opportunity for the county to catch up with the winter backlog of work. It also gives the county an opportunity to respond directly to requests from residents via the county’s Pothole Hotline phone setup. The county established the hotline so residents wouldn’t have to wait on the regular county customer service line. 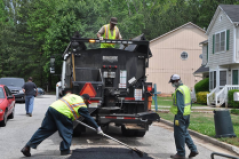 County employees perform the overwhelming majority of crater patches and other road repairs, although there are some projects that may be performed by contractors. The county is only responsible for county roads.

“The not-so-subtle nuance about the pothole repair process is that it cannot be performed in the rain or in the cold, and darkness complicates the process,” Brennan told GPN. He says that the county experiences a backlog of chuckholes over winter months, when shorter, colder and wetter days are more common.

“Patching potholes promptly is important because it stabilizes the integrity of the road.  An unfilled pothole will continue to deteriorate and develop into an expensive patching project,” says Doug Edwards, who formerly served as interim director of DeKalb County Public Works.

DeKalb County is Georgia’s third largest county, and has more than 700,000 residents. DeKalb County government legislative policy is set by a seven-member Board of Commissioners.

In the video, see the DeKalb County Roads and Drainage Department’s efforts to fill and patch as many potholes as possible during April.