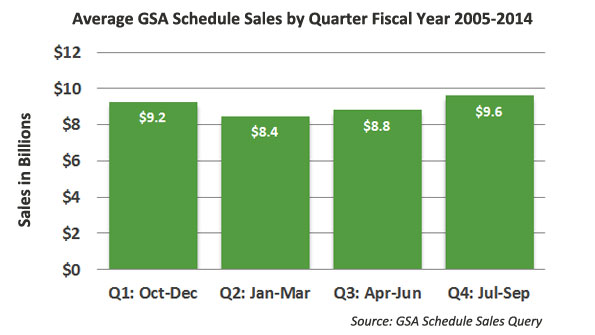 Editor’s note: As the 2015 federal fiscal year winds down to its Sept. 30 finish, GPN checked in with Julie Crosby (photo below on right) of Federal Schedules, Inc. We wanted to find out if there still is a federal buying season near the end of the federal fiscal year. Crosby’s views are below.

The government contracting industry has been debating the significance — and even existence — of fiscal year-end spending sprees for years now. It is around this time each year that industry talk turns to “use-it-or-lose-it” funding and the flood of spending that ensues.

Quarter 1 (October-December): Sales typically begin each fiscal year strong. For nine out of the past ten fiscal years, GSA Schedule sales in Q1 are the second highest for the year.

Quarter 2 (January-March): Over the past decade – without exception – sales for Q2 drop to the lowest point for the entire year. Sales decline from Q1 to Q2 by an average of $790 million each year.

Quarter 3 (April-June): With the final stretch of the fiscal year in sight, sales in Q3 begin to rebound after the Q2 decline.

Quarter 4 (July-September): With the exception of fiscal year 2013, which was marred by the effects of sequestration, spending through the GSA Schedule Contract peaks in Q4.

A decade of spending data does in fact show an increase in government spending through the GSA Schedule Contract in the final quarter of the government fiscal year. However, sales during the fourth quarter made up an average of 27 percent of total fiscal year spending. Fourth quarter spending increased by an average of only 1-4 percent in comparison to quarters one, two, and three. 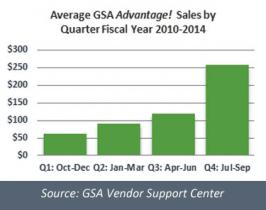 approximately $250 million is spent in the final quarter of the government fiscal year.

Historically, agencies do tend to spend more during the final quarter of the government fiscal year. While the increase may not be dramatic, it does represent an opportunity for government contractors. One way to position your company to capture fiscal year-end spending opportunities is to ensure your products or services are easily accessible. Contract vehicles like the GSA Schedule Contract are attractive to government buyers, particularly for time-sensitive purchases, because they streamline the procurement process. Online shopping options such as GSA Advantage! and DOD EMALL, further simplify the buying process.