Seattle Department of Transportation crews' street marking blunder slowed things down on a West Seattle street over the weekend.

For a brief time on West Seattle’s  Fairmount Avenue, drivers were instructed to pace their rides slower than the horse-and-buggies on the Oregon Trail.

A Valdosta University study states the sprightly mid-19th-century pioneers breezed through the historic route at about 2 miles per hour. Last weekend, a road marking on Fairmount prompted Seattle settlers to cruise through at about .05 miles per hour. 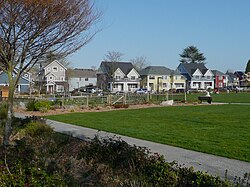 Seattle Department of Transportation employees working to update the speed limit based on a new Vision Zero safety strategy marked the northbound end of Fairmount with “20 HPM” – 20 hours per mile, instead of miles per hour, according to the Seattle Times.

SDOT Spokesman Norm Mah told the newspaper that the crews applied roadway markings at eight locations to highlight the neighborhood’s new speed limits. The markings were incorrect in two locations.

“I look at that and go, hmm. How could that happen? The how, the why – I can’t elaborate at this point,” Mah told the Times Monday morning.

Breck Dillard, who lives nearby, told KOMO 4-TV, he has an idea of what led to the speed marking snafu.

“My first reaction was that it was a protest, honestly. They were working on Sunday. It was hot. Just thought, ‘Oh, let’s just do this. And let the boss know that working on a Sunday maybe isn’t a good idea,” Dillard told the news station.

SDOT did not release a statement on how the mistake occurred nor the job status of the culprit.

By Monday afternoon, drivers were allowed to speed it up just a hair pass molasses. The markings were corrected midday Monday, according to the West Seattle Blog.

“The department will reinforce with its markings, crew members and supervisors the need for accuracy in completing this work and other work,” Rick Sheridan, SDOT communications director, said in a written statement.