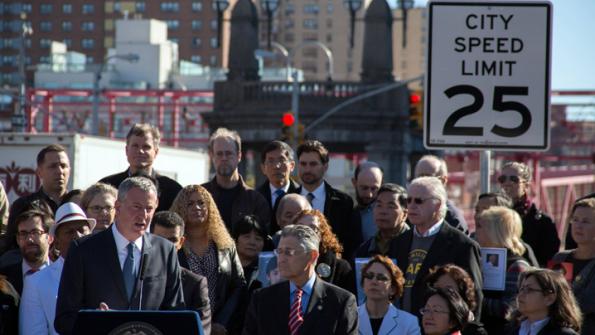 Last year, New York City saw its lowest number of pedestrian deaths since 1910 due in part to Vision Zero – a traffic safety strategy that has changed traffic enforcement and street design cities across the U.S. and the globe.

New York Mayor Bill de Blasio credits Vision Zero, which aims to create a road system where no one is killed or seriously injured, with reducing the number of pedestrian and traffic fatalities in his city since he introduced the plan in 2013, according to the Associated Press. Vision Zero contributed to New York’s pedestrian deaths dropping from 65 between  January 1 to May 25, 2013, to 44 – a 32 percent drop – for the same period this year.

New York City was the first American city to adopt the plan, which Sweden first implemented in 1997, by approaching the multi-faceted nature of traffic safety considering changes such as lowering speed limits, redesigning streets, implementing behavior change campaigns and enhancing data-driven traffic enforcement, according to Vision Zero Network’s website. The Vision Zero Network is a national collaborative campaign that works to promote Vision Zero policies across the country.

“For too long, in too many communities, our transportation systems have been out of sync with our priorities for improved health, sustainability, equity and economic well-being,” Vision Zero Network Executive Director Leah Shahum said in a statement. “Local leaders recognize that we can and must do more to ensure our citizens’ right to safe mobility.”

San Francisco’s Vision Zero program launched with a two-year action plan earlier this year, which is slated to help the city reach its goal of zero traffic deaths by 2024, according to a San Francisco County Transportation Authority report. Since 70 percent of severe and fatal collisions occur on only 12 percent of San Francisco’s streets, the Vision Zero SF plan’s first efforts will be taming those particular thoroughfares and expediting construction on 23 engineering projects that will protect bike lanes, widen sidewalks and reduce speed limits, according to the Vision Zero SF website.

Both New York and San Francisco’s plans involve improvements to traffic laws and enforcement, which in New York’s case has been met with some opposition from local bus operators.

According to a Transport Workers Union release, Metropolitan Transportation Authority bus drivers find the policy “unfair” and “inequitable.” Six MTA bus operators have been arrested under the “Right of Way” law, which de Blasio signed last year, according to the release. TWU’s Local 100 argues that bus drivers have a disadvantage as it relates to that law, because of obstructions in the buses’ “blind spots” and traffic signals directing pedestrians to cross as buses are making left turns.

City Councilman Daneek Miller, a former bus driver, recently introduced legislation that would halt arrests of non-reckless drivers after pedestrian accidents, according to the TWU release.

Despite some criticism for New York’s plan, the number of cities investing money and time into Vision Zero plans continue to grow. The Oregonian reported Portland’s city council voted to endorse a Vision Zero plan last week. Although Portland holds the lowest traffic fatality rate of the 50 biggest cities, the number of cyclists, pedestrians and motorists killed on roadways has remained unchanged in the last 20 years, according to the Portland Bureau of Transportation.

“We cannot accept the consequences of not acting now, even if it costs us money,” Bicycle Transportation Alliance Executive Director Rob Sadowsky told the newspaper.

Portland has set its Vision Zero goal to zero traffic fatalities by 2025.