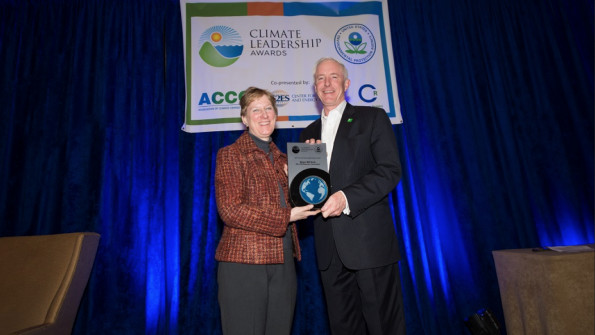 Municipalities’ climate actions serve as examples to others

Local governments are increasingly leading with exemplary work in reducing carbon pollution. Many are being recognized for their achievements. In 2013, the U.S. EPA’s Climate Leadership Awards honored four local governments for such work. The following year was equally strong, with the top honor going to Chula Vista, Calif., and an individual honor going to Sam Brooks from the Washington, D.C. government. Building on that trend, this year the EPA recognized state and local government achievements — four of the 18 awardees in 2015 were municipalities. This year’s winners included:

Mayor Bill Finch,
Bridgeport, Conn.
Bridgeport’s mayor has been a community and organizational leader in driving meaningful climate action within the Greater Bridgeport community and throughout the city’s operations, resulting in him receiving EPA’s Climate Leadership Award in the Individual Leadership category. Finch’s priorities as mayor include promoting energy initiatives, enhancing sustainability efforts, and taking steps to make Bridgeport one of the greenest cities in America. The photo above shows Mayor Finch receiving the 2015 award.

Finch implemented greenhouse gas emission reduction efforts in support of the absolute reduction goal he established for the city of 10 percent below 2007 levels by 2020. He formed public-private partnerships, such as with the Bridgeport Regional Business Council to develop a comprehensive sustainability plan that encompasses more than 60 projects, including: green job creation, new green businesses and new green energy initiatives. The photo to the left shows a Bridgeport wind turbine installation.

One project that was completed on his watch: a 16-acre solar photovoltaic array on a landfill in partnership with a local utility. He also turned brownfields into new parks. The mayor also promoted green energy and the creation of climate-resilient solutions for the coastal community’s under-served residents—all of which are helping to strengthen the local community.

The City and County of San Francisco, Calif.
San Francisco’s commitment to sustainability continues alongside a growing population and economy. The city strives to meet its climate challenge and continues to surpass international and California emissions reduction targets established as part of the Kyoto Protocol and California’s climate law, AB 32, while saving residents money, improving their health, addressing equity and creating jobs.

San Francisco was recognized with Excellence in Greenhouse Gas Management — Goal Achievement Award — for reducing GHG emissions 23 percent below 1990 levels, resulting in an absolute reduction of 1.4 million metric tons of CO2 equivalent. The city and its partners achieved emissions reductions through a variety of initiatives and the support of residents and the business community. Initiatives included: improvements in fuel efficiency, increased use of hybrid and electric vehicles, and increased efficiency in transit fleets; a cleaner commercial energy portfolio, plus improvements in the energy mix for Direct Access customers. The projects resulted in a 43 percent reduction in the carbon intensity of customers’ electricity use; continued residential and commercial diversion of recyclable and organic material from the landfill; and energy programs for private sector commercial and residential buildings.

The California Department of Water Resources
The California Department of Water Resources (DWR) operates and maintains hundreds of miles of flood protection levees and structures, provides water planning for California, administers over $1 billion in grant funds for improvements to local water resources, and provides regulatory oversight of dams statewide. DWR also manages the California State Water Project (SWP), which generates 98 percent of DWR’s emissions and is the single largest user of electricity in the state (energy is used to pump and deliver water to water users).

DWR was recognized with Excellence in Greenhouse Gas Management — Goal Setting Certificate — for setting an absolute GHG reduction goal of 33 percent between 2010 and 2020. DWR plans to achieve its reduction goal in several ways, including procuring renewable energy to run their water project; replacing coal power with cleaner, less greenhouse gas-intensive sources; and increasing the energy efficiency of pumps and turbines throughout the state water project system. DWR’s first-generation greenhouse gas emissions goal in 2010 was a 50 percent reduction by 2020 and 80 percent reduction by 2050 (both with a 1990 baseline). DWR is being recognized for setting an interim goal, still maintaining the same absolute emissions goals for 2020, but setting a new verified baseline at 2010 emissions levels.

The collaborative was recognized with an inaugural Innovative Partnerships Certificate. It engaged public agencies and stakeholders regarding climate change strategies and lessons learned from state and regional initiatives. The projects covered climate policy developments, greenhouse gas and sea-level rise modeling tools, and funding opportunities to support members in setting and meeting greenhouse gas reduction targets. One opportunity aims to develop capacity for local governments to implement measures in their Climate Action Plans. This partnership has public engagement and stakeholder outreach, and it is a replicable model for other regions.

The EPA’s Center for Corporate Climate Leadership organizes the annual Climate Leadership Awards with two co-sponsors, The Center for Climate and Energy Solutions and The Climate Registry. Applications are now being accepted for the 2016 Awards program until Sept. 25, 2015. Awardees will be honored during the 2016 Climate Leadership Conference, scheduled to take place March 8-10, 2016 in Seattle, Wash. For more information visit www.climateleadershipconference.org.

In addition to these awards, EPA’s State and Local Climate and Energy Program provides technical assistance, analytical tools and outreach support to state, local and tribal governments. A variety of publications and guides are available on the EPA’s website.

Melissa Klein is the communications lead for the U.S. EPA’s Center for Corporate Climate Leadership and Green Power Partnership.