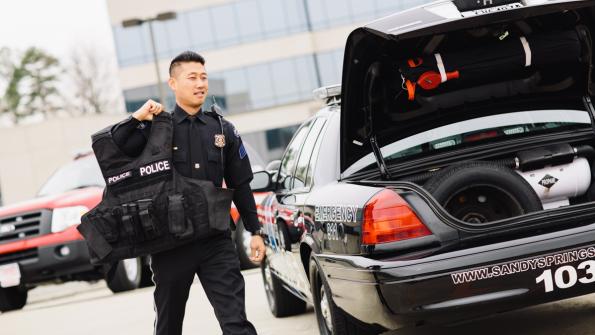 The Sandy Springs Police Department was created shortly after the city of Sandy Springs, Ga., was incorporated in December 2005. The department took over police operations from Fulton County in the summer of 2006, and currently employs 127 sworn officers.

In his former role as lieutenant commander of homeland security, Captain Bart Humble first started exploring alternative fuels after being asked to find a domestic fuel source that the city could rely on in the case of a disaster.

“The homeland security unit works to mitigate the effects of incidents and reduce harm to the environment,” Capt. Humble says. “Protecting our land isn’t limited to disaster response, but includes considering our economic and environmental impact on a day-to-day basis.”

According to Capt. Humble, after doing the research, propane autogas quickly rose to the top of his list. “Propane autogas is clean and American-made, and was more affordable to implement than other alternative fuels — we wouldn’t have to sacrifice anything we were looking for out of an alt fuel,” he says.

Finding the right fuel was the easy part; the more difficult task was getting buy-in from multiple stakeholders, including city council members, the police department’s middle management and line-level supervisors, and the city’s police officers.

“In order to get the go-ahead, I really had to have my ducks in a row,” Humble says. “I completed a full cost analysis showing return on investment, and presented a strong business case for propane autogas to the city council.”

While the cost analysis was a strong selling point, Humble says that Sandy Springs’ city council was equally motivated by the opportunity for the police department to become a sustainable leader in the community, which has an established history in the preservation of natural resources.

Propane autogas is an approved alternative fuel under the Clean Air Act, and vehicles running on the fuel emit fewer greenhouse gas emissions than comparable gasoline and diesel models, according to the Propane Research Council. 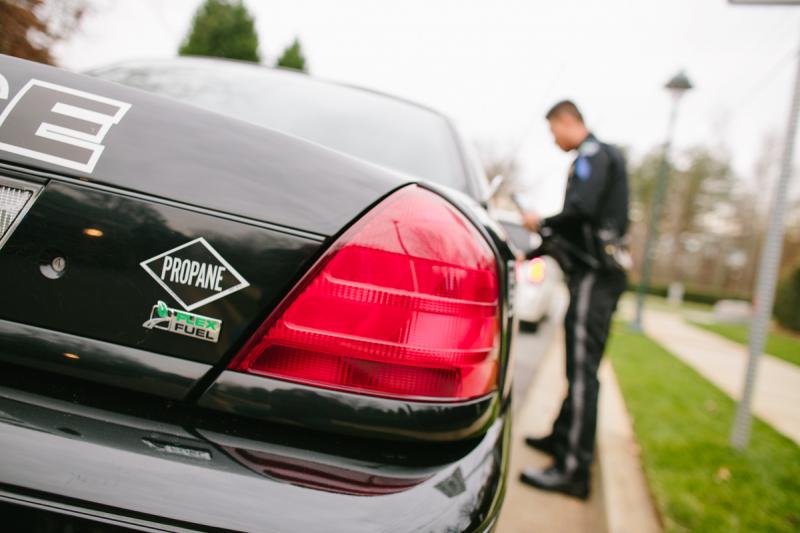 “It’s definitely a challenge to find sustainable solutions without significantly increasing operational costs,” Humble says. “But propane autogas gave us the perfect green-green solution, with a low total cost-of-ownership and a low level of environmental impact.”

For middle management and officers operating the vehicles daily, safety, reliability and performance were their biggest concerns.

“Once I provided the facts, it basically squashed any apprehensions the officers may have had,” Humble says. The fuel is less flammable than gasoline, and the tanks are 20 times more puncture-resistant that conventional gasoline tanks.

With homeland security, the city council and officers in the field on board with the concept, Sandy Springs gave propane autogas the go-ahead and converted 25 Ford Crown Victoria cruisers from gasoline to propane autogas bi-fuel systems in 2012. The success of those vehicle conversions spurred Humble to apply for a grant to convert additional vehicles through the Southeast Propane Autogas Development Program (SPADP), administered by Virginia Clean Cities.

“For law enforcement agencies, grants can be extremely valuable in cutting up front costs, and can play a huge role in a fleet’s decision to convert to an alternative fuel,” Humble says. The SPADP grant reimbursed the Sandy Springs Police Department for 50 percent of the total cost to convert 40 more vehicles, including Crown Victorias, Caprices and Expeditions.

On top of savings from grants, Sandy Springs Police Department is working with its propane retailers to lock in fuel costs. The department’s contract ensures at least a dollar per gallon savings compared with gasoline, and the department reports saving much more than that on average due to gasoline’s fluctuating prices.

Humble anticipates the department will continue to convert vehicles to propane autogas. He recommends other government agencies, cities and police departments looking for ways to trim costs while also helping improve their communities and environment to consider doing the same.

“Getting buy-in from so many different parties isn’t an easy feat. However, propane autogas has shown consistent cost savings, dependable performance, and is a clean fuel,” Humble says. “The bottom line is that propane autogas is a reliable fuel source, and I’d encourage any police fleet in a similar situation to adopt propane autogas-powered vehicles.”