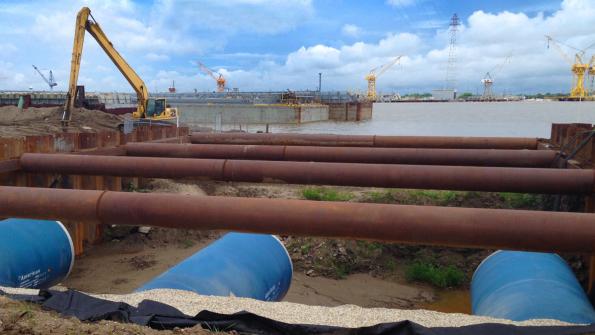 If you think Hurricane Katrina was the first time New Orleans suffered major flood damage, think again. Flooding has been as much a part of New Orleans’ 300-year history as jazz, jambalaya and French Quarter juke joints.

One of the city’s worst floods ever came in the mid-1990s, and that led to the creation of the Southeast Louisiana Urban Flood Risk Reduction Project (SELA). The main objective for SELA is to reduce flooding in three parishes — Orleans, Jefferson and St. Tammany. Funding issues stymied SELA’s initial progress, but federal money began pouring in after a Katrina-related levee break flooded 80 percent of New Orleans in 2005.

According to the U.S. Army Corps of Engineers’ website, SELA’s overall objective in Orleans and Jefferson parishes is to modify and improve drainage and pump excess water from flood-prone areas into the Mississippi River. Those waters currently drain into Lake Pontchartrain. Plans for St. Tammany Parish include channel enlargements, bridge replacements, detention ponds, levees and elevation of flood-prone structures. A substantial amount of this work has been completed in Jefferson and Orleans parishes, but work has yet to begin on the St. Tammany Parish projects, according to the Corps’ website.

A key element in SELA’s work is the need for huge pumping capacity, and AMERICAN’s spiral-welded steel pipe is playing a role. Begun several years ago, SELA’s $100 million-plus Harahan Pump to River project has relied on AMERICAN piping along the way. The project’s construction contract calls for the installation of more than 6,000 feet of AMERICAN 84-inch-diameter spiral-welded steel pipe. B&K Construction Co., LLC, of Mandeville, La., is the contractor.

The piping consists of three different lines being installed underground along Powerline Drive from Jefferson Highway to River Road Drive. From there, the lines continue up and over the levee to the Mississippi River. Pumping capacity is 1,200 cubic feet per second. Construction on this phase of the project started in March 2013 and completion is scheduled for early 2016. AMERICAN is based in Birmingham, Ala.

Learn more about the AMERICAN pipe-making process in the video.