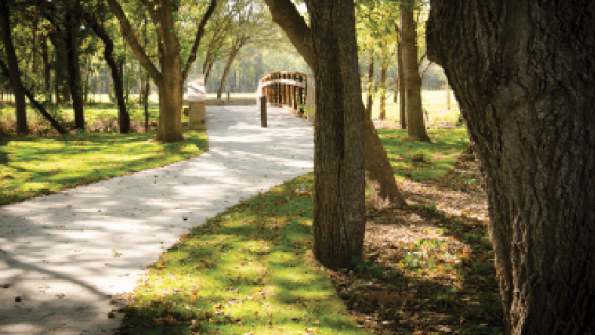 Countering the ‘Sprawl for All’ mentality, McKinney, Texas, builds parks and greenspace into development

McKinney, Texas is close to Dallas, but in many ways, far from it. While urban sprawl leaves many nearby communities struggling to maintain a distinct identity, McKinney, on the northeastern edge of the Dallas-Fort Worth metroplex, is known for its historic downtown area, rolling hills, tree-lined neighborhoods and city parks with streams and lakes.

Named #1 by Money magazine on the 2014 list of Best Places to Live in America, the city embodies its tag line: McKinney, Texas is Unique by Nature. Despite being one of the fastest-growing cities in the nation, McKinney has placed a value on maintaining this natural beauty, which has set the city apart from other suburbs.
With a young, active population that takes advantage of McKinney’s focus on activity, city leaders place a priority on providing diverse options for recreation. Tennis, disc golf, swimming, skating, skateboarding, hiking and biking are all found in its 2,300 acres of open space and 47 parks, sports complexes and recreation centers.

New McKinney Parks and Facilities
The McKinney Skate Park at Gabe Nesbitt Community Park opened in 2013 and has elements for all skill levels, including three bowls, street elements, more than 30,000 square-feet of concrete and shaded seating for spectators. The skate park is next to The Courts tennis complex, built in 2012 and named the United States Tennis Association’s Facility of the Year. It features a 3,500-square- foot clubhouse and 11 lit tennis courts, including a signature stadium court.

“These elements of our parks system are exceptional,” says McKinney’s Recreation and Open Space Director Rhoda Savage. “They exemplify what makes this community unique and the quality of life here so desirable. We want to capitalize on these trends as we plan for the future of McKinney parks and recreation.”

What’s next in McKinney
While the goal is not to grow for the sake of growth, the city is a hotbed for developing residential and commercial property. As growth occurs, the city must consider how best to build out the infrastructure to handle it, such as addressing transportation issues, promoting economic development and maintaining a high quality of life for residents in the area.

To ensure that the community’s vision for growth blends with the goal to maintain and preserve the city’s natural beauty, the city has tasked Savage to update the Parks, Recreation and Open Space Master Plan to include future parks and open space in the planning of neighborhoods.

This master plan is vital to the northwest sector of McKinney. The land there is underdeveloped, and filled with beautiful natural topography that is typical of the metroplex.

The city wants to protect and preserve the area, ensuring that development complements the natural beauty of the open space and that it creates opportunities for recreation and public access.

The last Parks Master Plan was updated in 2009 and took a traditional approach to parks development. Now, city leaders are looking to be trend-setters in the way they incorporate booming development with natural preservation.

“We plan to make a statement about who we are, and create a different experience for people,” Savage says. “We want to put McKinney on the map in the process for doing things in a truly unique and different way.”

The city is also eager to hear from their primary customers: residents. A series of public meetings will be held in the community with a focus on athletic leagues, business developers, school districts and homeowner associations to find out what the public most wants. The city hopes to have the Parks Master Plan finalized in 18 months.