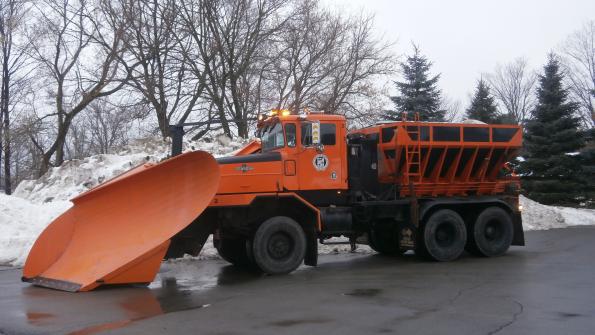 A pair of Oshkosh snow-clearing vehicles recently stood up to the elements in Western New York.

“Over the two days, we got about 80 inches of snow — day one had 4 feet and day two about 3.5 feet,” explains Ron Unverdorben, highway superintendent for the town of Marilla. “I’ve lived here my whole life, and I would have to say this is the most snow I’ve ever seen at one time.”

With a snow removal crew of just five, it was an all-hands-on-deck situation. “Our strategy is to be out there through the entire storm — we never take the approach of waiting until the storm has passed,” Unverdorben says. “Lake effect snows can be unbelievably intense; it’ll be so bad that you can’t see past the hood of your truck.”

During the height of the mayhem, the Oshkosh 6 X 6 truck was called upon to rescue trapped motorists and, together with the Marilla team, helped save lives. “We used the 6 X 6 to escort the fire department to 911 calls, including two tour buses that got stranded,” Unverdorben says. “We had to assist in getting those people to an emergency shelter. We got sidetracked with things like that, so that took away from some of our time to plow roads. We were pulling trucks out of the ditch left and right. It was a little bit crazy.”

Sleep was not an option with snow piling up at the rate of 5 to 6 inches per hour. “We were doing 21 hours a time in the trucks and then taking three hours off,” the superintendent says. “Then we’d be back at it.”

The citizens in and around Marilla were fortunate to have the pair of vehicles serving on front-line duty. “I drive the 6 X 6, and that’s the truck I was in for 21 hours each day,” Unverdorben recalls. “The Oshkosh trucks took whatever we threw at them. We had roads with 5.5 feet of snow across the entire surface. We went right down the road with the 6 X 6 and never missed a beat.”