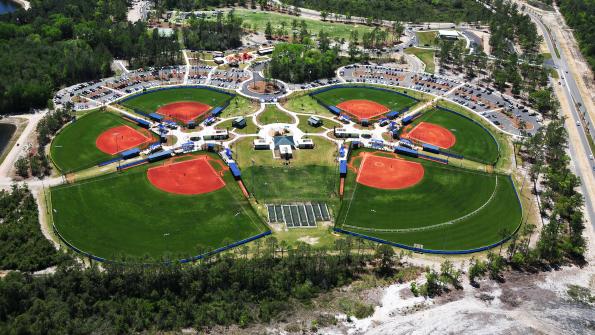 Many different types of communities across the country share a common thread – they rely on tourism dollars. Be it for natural wonders, man-made attractions, large-scale events or simply the pleasant weather, these communities attract visitors who bring their wallets with them.

But what if a community isn’t home to a beautiful beach or annual event? Many such communities are leveraging tourism dollars by focusing on sports tourism, but those big dollars are not coming from The Big Leagues. By attracting amateur sporting events, cities and counties are seeing increased revenue, often by utilizing resources they already have.

According to the U.S. Travel Association, in 2012, 27 percent of all trips taken inside of the United States were directly related to an organized sporting event. While this includes major sporting events, such as the Super Bowl or World Series, it also includes regional events, like high school lacrosse championships or minor league baseball tournaments.

Specifically, the sports tourism market is limited to amateur sporting events, and is defined by overnight stays by out-of-towners. When measuring its impact, sports tourism includes dining, accommodations and entertainment spend from individuals who would not otherwise be present in the community, Pathik says.

This sector is expanding exponentially. “The sports travel market is the fastest growing segment of the travel industry,” says Pathik. “It is the only segment in the travel industry to not decline in any quarter within the recession… it’s about a $7.5 billion industry.”

The phenomenon, Pathik says, is relatively new. The trend started in Orlando, Fla., with the opening of

Disney’s Wide World of Sports in 1997. Orlando and Disney both knew that if they could get youth and amateur teams coming down for competitions, they would bring with them competitors, their families and their fans. Pathik says the city saw the potential for a tremendous, and yet untapped, revenue stream.

So since that time, who has come off the bench and into the game?

Piggybacking off of its southern neighbor, Myrtle Beach, North Myrtle Beach recently opened its Park and Sports Complex – a 763-acre facility consisting of six baseball/softball fields and eight soccer/lacrosse fields. Since opening, the complex has played host to several major and minor events and bolstered the local economy.  It was built to be an economic engine, and it hasn’t disappointed.

In 2010, the city council began looking at ways to strengthen the local economy, Matt Gibbons, superintendent of Recreation and Sports Tourism for the city, says. Given its geography and features,

North Myrtle Beach cemented its status as a summertime tourist destination, but business lags in the fall and winter. Gibbons says the city was looking for a way to keep tourists coming year-round.
Seeing successes in other nearby communities, North Myrtle Beach decided sports tourism was the answer. To be competitive, the city needed to open an outdoor sporting complex that could draw regional, national and international events.

The council passed a general obligation bond for $15 million to cover the costs of the complex, which raised taxes in the city, says Gibbons. For the average citizen, property taxes increased about $40 a year, with the tax ending in 10 years. But as with any new tax, this action was not without controversy.

“There will always be people who are unhappy about [new taxes],” says Gibbons, “but I think most of the community understood it.” Gibbons says the decision to proceed showed foresight: money invested in the complex would end up paying fiscal dividends in the future.

Since opening on March 1, 2014, the complex has hosted 52 events ranging from the traditional baseball and softball tournaments to more unique competitions, like Ultimate Frisbee and the Quidditch World Cup – Quidditch being the fictional game played in the Harry Potter novels.

“It was pretty wild,” Gibbons laughs. But as strange as the games may have been, the event was international in scope, bringing about 80 club teams and thousands of college students from across the globe to North Myrtle Beach for a weekend. “That probably got us the most notoriety,” he says.

While not every community can play host to a Quidditch World Cup, similar tournaments can measurably boost local economies. Gibbons estimates the complex generated $16 million last year. As far as direct revenue for the government, Gibbons says for every million dollars generated, about $20,000 goes directly into city coffers.

Gibbons says the complex has been a resounding success for the community. “This is our crown jewel for sports tourism in the North Myrtle Beach area,” he says.

To break into the sports tourism market, Salem, Ore., created a new position; the recently appointed Sports and Events Sales Manager for the city is Brian Chung.

Rather than build new facilities, the city seeks to create connections between its current resources, the local government and the sports community.  Chung says his main goal is to bring in new events to “boost economic impact… [for travelers to] stay in our hotels, eat in our restaurants, shop in our shops – to bring new money into the area.”

Chung says he has employed a three-pronged approach for securing new events.

First, the city reaches out to local sports clubs to see what events they are currently hosting and how the city can support and grow these events. This is usually through marketing and P.R. efforts, says Chung.

Second, the tourism department works with Salem’s facilities to increase facility capacity and secure new events. The Salem Armory, for example, was an underutilized community resource, but, thanks to efforts by Chung and his team, the facility recently played host to a major Brazilian jiu-jitsu tournament sponsored by the Oregon National Guard.

Third, Chung reached out to the various national sporting associations to assess needs for regional and local athletic events. With this information, he was able to identify the overlap where Salem’s resources could meet those needs.

“Sports tourism is big business in Oregon,” Chung says. “Salem hadn’t really been tapping into that market actively.” He adds these events and tournaments are low-hanging fruit, so to speak – that with the right kind of prioritization, they can be easily secured, at great benefit to the community.

Since he started in September, Chung has been able to land three major events – a baseball tournament, a soccer tournament and the aforementioned jiu-jitsu tournament. Combined, these events carried an estimated economic impact of $83,000.  Chung also recently secured the Women’s Jr. Olympic Water Polo qualifiers, which will be coming to town this spring.

Chung says that above all, a successful sports tourism program is about facilitation. “It’s about making those connections, about reaching out and saying ‘Hey, we have these facilities, how can we host you?’”

“Sports [tourism] has really been a key…” says Anne Druck, president of the York County Convention and Visitors Bureau. “It’s helped us to buffer and strengthen some of the slower months.”

Not only has sports tourism helped the community thrive economically during the slow seasons, Druck says sports travelers spend more money than tourists traveling for business, leisure or events.
In 2015, York will host three new events – a women’s ice hockey tournament, a handball championship and a wrestling competition. These events were secured, Druck says, by making connections and understanding the county’s strengths.

Every year the county has a representative at major industry trade shows such as the National Association of Sports Commissions (NASC) conference, the TEAMS trade show and a variety of sport-specific organizational meetings. Druck says this helps her organization stay abreast of industry needs, maintain connections and establish new relationships.

Druck also had the NASC perform a facility audit for the county, which helped the county understand the capacities and capabilities of its current resourses. “That helps us to position our facilities where they’re going to be successful with an event,” she says. “It’s a combination of working with your facilities, and it’s also very important to sell them… the facilities are the priority.”

Stepping up to the plate

What are the first steps in creating a sports tourism program where none exists? Pathik says first, it’s important to perform a feasibility study through an organization such as the SFA|SMA, a different third-party vendor or performed internally.

This study should include an economic impact analysis with a tight scope. The scope should be sports-specific, says Pathik.

As part of this study, communities should look at regional needs, and assess competition. The community should also examine secondary infrastructure, checking a variety of factors including availability of hotel rooms and traffic infrastructure.

Next, a community should look at the resources it has through a sports tourism lens. Could the walking trails around a park be used to host a 5k run? Could the local bowling alley host a regional championship? “In most cases it’s about figuring out what assets that community already has and how to utilize those to bring visitors into the community and spend money when they would not otherwise,” says Pathik.

Diversity is also key to a successful program. One mistake communities commonly make is to focus specifically on one sport, and then build to facilitate only that type of event. “That’s a mistake because there are a number of other ways to get into the sports tourism industry without having to invest in massive new infrastructure projects,” he says.

Pathik also suggests communities new to sports tourism start small. “It’s better for them to get in the game of sports tourism by learning how to host a few events and grow into the hospitality environment that’s required for them to eventually win bigger events.”

Regardless of size, resources or facilities, Pathik feels that most every community could see benefits from even a modest increase in this market. “If you’re a community, and you’re thinking about tourism, you have to be thinking about sports tourism.”