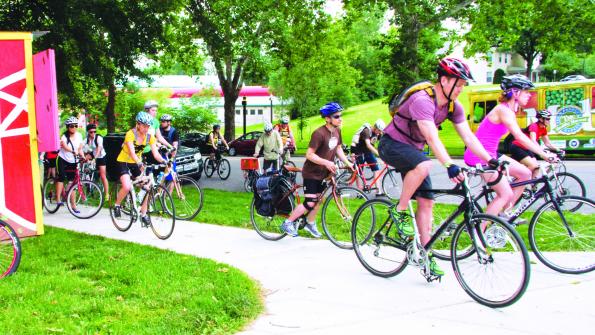 Communities are investing now for a better future

Sustainability requires municipalities to balance economic growth and environmental issues, while at the same time ensuring a pleasant place to live and work.

While approaches to sustainability differ depending on the size and structure of individual cities, organizations such as ICLEI – Local Governments for Sustainability and the National League of Cities (NLC) provide a larger perspective on the challenges and opportunities cities face as they work to become more sustainable.

Consulting firm ARCADIS recently compiled the results of research on sustainable cities conducted by the Centre for Economics and Business Research (CEBR). Fifty cities from 31 countries, chosen for their variety of characteristics, were ranked across a range of indicators. One of these cities was Los Angeles, Calif., which ranked 28th out of 50 for overall sustainability.

Labeled “the prototype of the future metropolis,” Los Angeles was lauded for its recent appointment of a Chief Sustainability Officer, Matt Petersen. At the time of his appointment, Petersen told Southern California Public Radio, “Cities are on the front lines of solutions to climate change and creating a clean energy economy.”

Water is one of the greatest challenges Los Angeles faces, and in October 2014, the mayor’s office issued a directive to address ongoing drought conditions in the city, which currently imports 80 percent of its water. Along with dramatically reducing the use of water across all city departments, the directive required the Department of Recreation and Parks to present a plan to convert golf courses to 85 percent recycled, non-potable water by 2017, and determine the feasibility of converting to 100 percent non-potable water in the future.

In February, Mayor Eric Garcetti welcomed a new recycled water system at Hansen Dam Golf Course. The system will save up to 163 million gallons of drinking water every year.

Presently, six of the seven 18-hole courses owned by the city are being irrigated with recycled water, with the retrofit of the one remaining course in the planning stages. In a speech given at the inauguration of the project, Enrique Zaldivar, director of L.A. Sanitation, the entity that provides the water for the project, said, “This project is representative of the way we can reimagine in-place infrastructure to help meet water conservation goals.”

At the end of 2013, Kansas City, Mo., adopted sustainability as a core principle of city government. By examining each new city ordinance and resolution through the lens of sustainability, the city is moving forward on numerous fronts, from social equity to environmental quality and economic vitality.

In 2008, the city adopted the Kansas City Climate Protection Plan, an initiative to lower greenhouse gas emissions to 30 percent below 2000 levels by 2020, making it the first major city in the Midwest to take such a step. In 2013, the city took a look at how it was doing, and what it needed to do to keep moving forward. The result of this was the “Kansas City Sustainability Book.”

When asked how the city had been able to maintain its momentum, Murphey said, “One of the ways is to do as good a job as possible of engaging as many people in the organization, and I think that’s reflected in the breadth of activities that are listed in our report. When I started here in 2006, I could identify all of the activities that were going on in Kansas City government that I could call sustainability initiatives. Now, I can’t even begin to do that, because so much is going on…that to me is the measure of success.”

A major component of the city’s sustainability initiative is automation. The use of an automated monitoring system to gather data on numerous systems and make adjustments in real-time to avoid energy spikes enabled a 14 percent reduction in energy consumption at City Hall alone. With another system that shuts down over 4,000 computers outside business hours, the city sees savings of about $80,000.

But there’s more to Kansas City’s sustainability plans than energy efficiency: the city’s decision to become more bike-friendly as a part of the climate plan resulted in a Bronze designation from the American League of Bicyclists in 2011. A local non-profit organization, Kansas City B-Cycle, partnered with Blue Cross and Blue Shield of Kansas City to establish a downtown bike-sharing program. The initiative launched in 2012 with 100 percent private funding, enabled by the new bike-friendly infrastructure provided by the city. The bikes have the added advantage that they provide the user with statistics about calories burned, miles traveled and pounds of carbon offset. By October 2014, over 48,000 miles had been logged.

Benjamin Bachwirtz, who has been involved in the program since its inception, says of the project,  “[A]n investment…only works if it’s shored up by other changes like new development codes, development incentives, buy-in from the business community, and by complementary transportation options.” He continues, “The solution to sustainability issues – and really, a lot of other issues – on the municipal scale so often seems to be expensive, visible projects… City leaders so easily forget [to] support and leverage such projects with other efforts. Bikeshare does that for public transportation investments.”

Suwanee, Ga., a city of about 18,000, has just begun a new revision of the Downtown Master Plan, originally adopted in 2002, and revised in 2009. When asked about what made Suwanee so unique compared to its neighbors, Josh Campbell, the city’s planning director, said, “It was really a conscious decision that was made when we were going through the 1999, 2000 comprehensive planning process… Town center is the best example we have of quality vertical development.”

By encouraging density of development, an unusual goal for a suburban community, the city wants to maximize the available green space, growing the city on a mixed-use model. “When I first started working here, seeing someone riding a bike or walking around was really unusual, and you wondered what caused them to be in a place where they had to get around by walking… now they do it because it is a form of transportation or exercise that they would like to engage in. We want to continue to have that happen and have it be a pleasant experience,” Campbell says. “For a small city, one of the challenges is making sure there is enough there there. Making sure that we have the things that people want so that they want to live here.”

Part of the goal of generating a distinctive identity for the city is encouraging businesses to locate in or near Suwanee to provide the jobs that residents want so they can avoid the long-distance commutes that are so common in this area. This includes working with local business associations to attract large established companies to the high standard of living in Suwanee, but also encouraging the small local businesses that give the city a unique character.

The future of sustainability:

ICLEI – Local Governments for Sustainability USA provides skill training, a library of online resources and comprehensive guidance documents to assist municipalities in applying sustainability solutions. Executive Director Michael Schmitz, says, “There is a fierce sense of urgency, and it allows policymakers to be able to pick the most effective solutions, not just a good solution, and to be able to look at those solutions that can scale up.”

A future trend, ICLEI notes, is the move toward open data at the city level – the three cities featured here have embraced this trend: “The use of data to be able to inform policymaking is absolutely critical, and it’s the way you can test what really works. What we are seeing in the city planning space is becoming much more rigorous, much closer to what you see in scientific, peer-reviewed disciplines,” Schmitz says.

To improve sustainability in the future, Schmitz points to an increased need for city officials to communicate these benefits clearly, without using potentially charged buzzwords that detract from the goals and lead to unnecessary symbolic battles.  A program that is going to provide jobs and increase efficiency needs to be identified as such, rather than just as a program to reduce the emission of greenhouse gases. “You need to communicate to multiple audiences in a way that they can get the importance of it  – it’s not a trade off, you’re talking about win-wins.”

With resources scarce, the future of city planning and sustainability is an increased focus on data-driven, scalable projects that provide multiple benefits, from job creation to efficiency to improvements in the health of a community. The open-data revolution that grants residents ready access to all city information from budgets to planning documents makes everyone a stakeholder in the process.

Campbell, in Suwanee, stresses the importance of public involvement in the planning process. In Suwanee, the city planner’s office made tentative decisions regarding future directions that were completely revised after speaking to the community.

Brooks Rainwater, director of City Solutions and Applied Research for the NLC, says cities are a critical component in the quest for sustainability. “Cities are where the action is, as mayors, city council members, and other city officials have led with sustainability initiatives in recent years. More than 80 percent of Americans live in cities, so sustainability issues are acutely felt at the city level.”

Schmitz agrees. “You can get a lot more conversation, planning and action at the local level because folks can get together literally. Physically they can know each other and move something forward together based on the trust you get from working together,” he says.