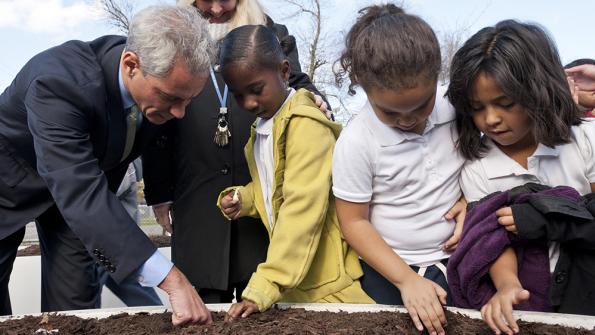 Cities take the initiative to build playability into present infrastructure

Ask city planners about the building blocks of quality of life, and they’ll tell you residents want communities where they can live, work and play.

While “play” might bring to mind adult indulgences like quality restaurants and arts and entertainment venues, it also includes a new “it” factor: playability. Playable cities – those with activity options for children – are more desirable for both residents and investors.

Playability can be measured by the number of parks and playgrounds, but there’s more to it than that. A study by the children’s nonprofit KaBOOM! and behavioral-economics research firm ideas42 found there are bottlenecks to play, especially among the urban poor.

Lack of time was the biggest barrier, said 46 percent of those surveyed. Carving out a few hours to go to major city parks was burdensome, and typically not feasible for weekdays when parents work and children are in school.

Cities are seeking creative ways to remedy the problem, adding activity opportunities without breaking the bank. Simple innovations, like building a crosswalk that is also a hopscotch lane or adding a structure at a bus stop that children can climb—bring playfulness and vibrancy to city streets.

In October, city planners from across the U.S. came to Chicago for KaBOOM!’s Playful City USA Leaders Summit to learn how to increase playability, especially in low-income neighborhoods where time deficits can be particularly onerous. “We need to attract and keep the ‘creative class’ in cities as these people are the key drivers of local economies,” notes Darell Hammond, founder and CEO of KaBOOM! “But cities also must strive for equitable distribution of services and resources to circumvent the cycle of poverty.”

Playability programs, like those in Baltimore, Chicago, Memphis and York, Pa., show how playability is translating into livability.

Baltimore: As part of her goal to attract 10,000 young families back to the city, Mayor Stephanie

Rawlings-Blake is transforming existing infrastructure so it becomes more playful for kids.
In the Bromo Tower District, kids can hop and skip their way across streets thanks to a series of playful crosswalks, which have been turned into hopscotch lanes under the direction of the Mayor’s Office, Baltimore Office of Promotion & the Arts and the Department of Transportation.

In the  Highlandtown neighborhood, a typical bus stop bench has been replaced by a supersized sculpture of the letters B-U-S. Kids climb through the oversized pine-slat letters. The installation has become an instant neighborhood icon and turned a space normally associated with waiting and frustration into a joyful play area for families.

Chicago: Mayor Rahm Emanuel has pledged to add nearly 1,000 new acres to the Chicago Park District, funded by $400 million from public and private sources. A major initiative is The 606, a rails-to-trails conversion that will provide residents with new pedestrian and bike trails, reinventing Chicago’s industrial past as scenic play areas within reach of 20,000 of the city’s youngest residents.

Chicago is also implementing People Spots, temporary pop-up “parklets” that “bump out” a portion of the sidewalk, overtaking a street parking spot or two. This area is walled in with concrete planters, making an impromptu place for children to expend energy and for adults to take a break. These “parklets” prove the notion that with minimal accommodations, play can occur anywhere.

Memphis: With more than one-third of residents categorized as obese, Memphis is emphasizing health and fitness programs for children as well as adults. The city is investing in play by improving accessibility to public playspaces, and the city is already using play as a means to create safe and vibrant neighborhoods to attract and retain families.

York: Play is popping up in surprising ways in this Pennsylvania city thanks to public/private initiatives such as Play Streets where streets are shut down to traffic and opened up for fun.

York is at the start of a playability program it hopes will transform the city. Since the summit, delegates from York have hosted their first Eat Play Breathe York Advisory Council meeting which included 45 organizations and a focus on play possibilities.

Projects at the forefront include art play structures in the downtown district in partnership with the art community and local organization Downtown Inc. York is also taking a page from Baltimore’s playbook, considering implementing playful bus stops that include swings and tic-tac-toe boards for public use during down times. A map of play will ensure that all residents are aware of playable areas, and the city’s Bring on Play Conservancy will serve as advocates so that these ideas become realities for their community.

If your city is working to create programs or infrastructure that encourage healthy, outdoor play, consider applying for a Playful City USA designation.