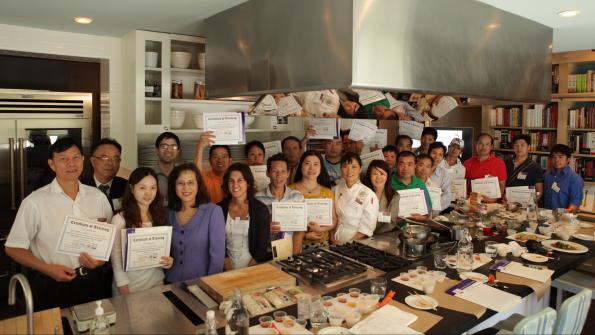 To prevent heart attacks and strokes, the Philadelphia Department of Public Health (PDPH) partnered with Temple University’s Center for Asian Health, the Asian Community Health Coalition and the Greater Philadelphia Chinese Restaurant Association to reduce the salt content in dishes served at over 200 Chinese takeout restaurants across the city.

“More than 75 percent of the salt we consume comes from packaged and restaurant foods,” says Dr. James Buehler, Philadelphia health commissioner. “By partnering with these Chinese take-out restaurants, we have reduced sodium in over 3 million meals per year.”
Since 2012, 221 Chinese takeout restaurants have enrolled in the Less Salt, Healthier Eating initiative.

“We recruited restaurants in low-income African-American and Latino communities in North, South and West Philadelphia,” says Dr. Grace X. Ma, director of the Center for Asian Health at Temple University. “Nearly half of African-American adults and 30 percent of Latinos in Philadelphia have high blood pressure, so these communities were the most important places to start.” Of 300 restaurants recruited to participate, 221 signed on despite the lack of a monetary incentive.

For many chefs and restaurant owners, the cooking training was the first formal culinary education they had received. Beyond the low salt cooking techniques, they received lessons on ingredient shopping, knife skills and recipe development.

The restaurants focused their initial efforts on their two most popular dishes: chicken lo mein and shrimp and broccoli. Before the initiative, chicken lo mein from 20 of the restaurants had an average of 3200 mg of sodium and shrimp and broccoli had 1900 mg of sodium. U.S. dietary guidelines recommend less than 2300 mg per day. Six months later, the sodium content of both meals decreased by 20 percent, and 24 months after the initial training, sodium levels had declined by 30 percent. Key sodium reduction strategies included cooking with half the amount of sauce as typically used, incorporating fresh vegetables, and using low-salt ingredients and flavor enhancers, like herbs and spices.

“Our members are very, very excited about being part of this important public health initiative,” says Steven Zhu, general secretary of the Chinese Restaurant Association. “Many of us know that too much sodium is a problem, but this program helped us to understand what we could do to lower sodium content and help our customers be healthier.”

Zhu says his members are also concerned about customers who come to the restaurants and attempt to purchase tobacco products even though they are underage. As a condition of participating in Healthy Take-Out Initiative, restaurants must comply with laws prohibiting sales to minors. Notably, youth tobacco sales violations at Chinese takeout restaurants have dropped by nearly 50 percent in the last year through owner education and enforcement.

“Smoking, like salt consumption, is a critical risk factor in the development of high blood pressure,” says Dr. Giridhar Mallya, director of policy and planning for the PDPH. “By addressing both issues at once, we can prevent heart attacks and strokes, which kill over 4,000 city residents annually.”

The Healthy Chinese Takeout Initiative has been recognized by the Centers for Disease Control and Prevention and the Trust for America’s Health as a promising upstream strategy to promote better health. Lessons from this initiative are being shared with other cities through conferences, scientific publications and public health networking. The Philadelphia team has also been in regular communication with a group from China’s Center for Disease Control, which is implementing a regional sodium reduction initiative in Shandong Province.

“Our next steps are to increase access to affordable, low-sodium ingredients for restaurant owners and further engage community members in these efforts,” says Ma. For more information, visit www.foodfitphilly.org.