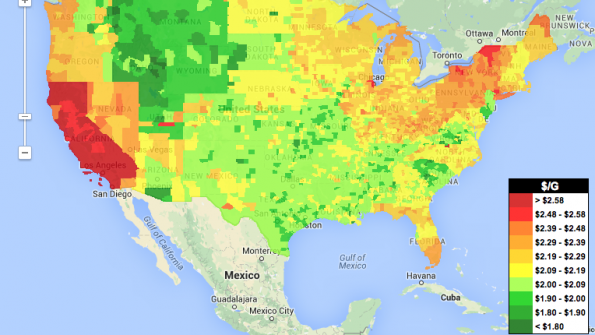 Where to find the cheapest gas in the nation?

Gas prices plummeted last month, and though they are once again beginning to creep back up, many communities are still experiencing rock-bottom prices.

Over the past six months the price of oil has plummeted, cutting the average price of gas to less than $2 per gallon in five states. But where are the cheapest gas prices in the nation right now?

Currently (as of Feb. 10), Idaho has the lowest statewide average price at $1.87 per gallon, according to GasBuddy.com, a utility that helps track gas prices across the country. Idaho is followed by Utah at $1.89, Montana at $1.92, Wyoming at $1.96 and Missouri at $2.

Hawaii currently has the highest prices – a gallon will cost $3.05 in the Aloha State on average, but in the state’s capital, Honolulu, it’s a little lower – $2.92.

There are numerous factors contributing to gas prices – foreign oil trades being the largest, as well as state and local taxes. California has some of the highest taxes on gasoline in the country, and it shows; California's average price stands right behind Hawaii at $2.65 per gallon.

While even California and Hawaii’s prices are still well below where they’ve traditionally stood, GasBuddy says the low prices won’t last forever. Already there has been an uptick in national prices as foreign oil prices have begun to rebound and domestic refineries enter routine maintenance cycles, limiting output.

Nationally, prices rose significantly this week. Last week more than half of the country’s gas stations were selling under $2 per gallon, now it’s closer to a quarter. Some of the largest increases in urban areas were Danville, Ill., which went up by 32 cents per gallon, Yuba City, Calif., up by 26 cents, Bloomington, Ill., up by 26 cents and Wichita Kan., also up by 26 cents.

GasBuddy predicts prices will continue to increase as the weather gets warmer, but spikes should be more subdued. For more information on gas prices, check out GasBuddy’s interactive map.