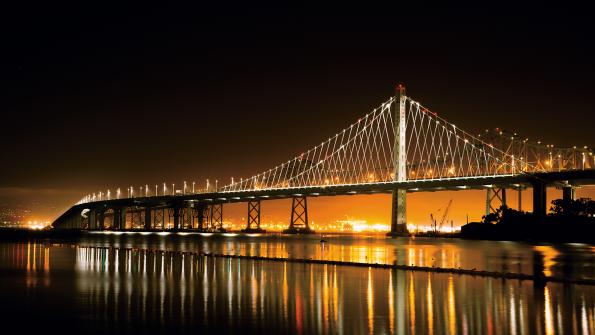 In total, the bridge now employs nearly 1,600 custom-built LED light fixtures leveraging more than 51,500 LEDs. The system lights the entire east span at an estimated energy savings of 50 percent and lifetime of 15 years. The system is expected to last seven times longer than previously deployed lighting technologies , while increasing the quality of light.

“We wanted the east span of the Bay Bridge to not only be aesthetically pleasing, but also cost-effective and functional for travelers,” said Andrew Fremier, deputy executive director at Bay Area Toll Authority. “The new LED lighting solution by Musco using Cree’s LED technology improves the way residents and visitors experience the Bay Bridge. It provides crisp, brilliant light for all who cross it, while delivering energy efficiency and payback for years.”

Cree worked with Musco Lighting to install its XLamp XM-L LEDs. The product features a compact footprint, enabling Musco to shrink the fixture size by reducing the number of LEDs and optics in the system. According to Musco, the LED installation will save more than 2 million pounds of annual carbon emissions.

For 40 years, Musco Lighting has specialized in the design and manufacture of sports and large area lighting around the world. Cree is a producer of lighting-class LEDs, LED lighting, and semiconductor products for power and radio frequency (RF) applications.