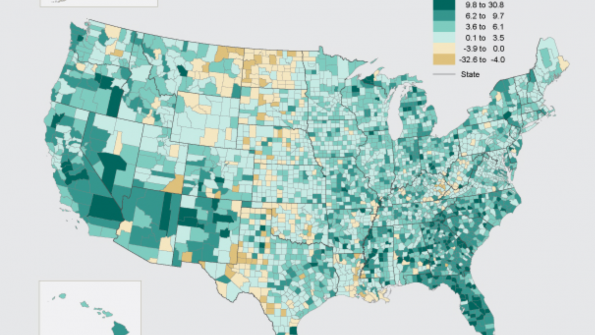 According to census data, the poverty rate for school-age children remains above pre-recession levels in 30 percent of counties.

The poverty rate for school-age children remains above pre–recession levels in approximately 30 percent of America’s 3,140 counties.

The U.S. Census Bureau found the rate increased in 928 counties from 2007 to 2013 and fell in just 15. These statistics are taken from the Small Area Income and Poverty Estimates program, which provides single-year income and poverty statistics for all counties and school districts. Nationally, the poverty rate for school-age children is 20.8 percent, or roughly one in five.

“County school-age child poverty rates are still above their prerecession levels in metropolitan areas of California, Nevada, Arizona, Florida, Georgia, the Carolinas, as well as the coastal areas of the Northeast and Great Lakes states,” Wesley Basel of the Census Bureau’s Small Area Estimates Branch said in a statement. “State and local programs use these statistics for distributing funds and managing school programs.”