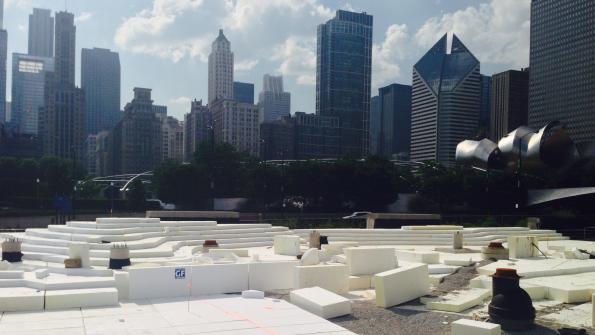 Construction crews in Chicago have built a signature outdoor space in the middle of the Windy City’s downtown. Park designers specified expanded polystyrene (EPS) geofoam as a durable, yet ultra-lightweight fill alternative at the site.

Construction crews in Chicago have built a signature outdoor space in the middle of the Windy City’s downtown. The 20-acre Maggie Daley Park on the Lake Michigan shoreline provides residents and visitors with space to relax and play year-round. The Chicago Park District operates and manages the park.

One challenge facing the project’s landscape architects was how to construct hills and landscape contours throughout the space, including on top of the East Monroe Street Parking Garage, which lies underneath the park. Soil would be the typical choice, but would have been too heavy for the garage to support.

Instead, the park designers specified expanded polystyrene (EPS) geofoam as a durable, yet ultra-lightweight fill alternative. Geofoam is approximately 100 times lighter than soil (0.7 to 2.85 pounds per cubic foot compared to 110 to 120 pounds per cubic foot), so it enabled designers to create a visually interesting landscape and still keep the garage in place. Despite its low weight, EPS geofoam is strong enough to support the weight of jet aircraft and locomotives. The product has been successfully used as a subgrade for runways, taxiways and rail beds. “I think it allows you the freedom to be creative,” said Peter Schaudt, FASLA, who is a partner with Hoerr Schaudt Landscape Architects. Schaudt was recently quoted in an article in the Chicago Sun-Times.

Contractors have installed 65,000 cubic yards of InsulFoam GF EPS geofoam supplied from the company’s plant in Mead, Neb. In addition to new geofoam, crews reused geofoam that had been previously installed in Chicago’s Daley Bicentennial Plaza. Go here to view the Maggie Daley Park site on this construction camera.

InsulFoam GF does not require surcharging, preloading, or staging often necessary with other fills. It resists moisture, freeze-thaw damage, insects, mold, and decomposition. The product is an environmentally responsible material. It is inert, does not emit undesirable gases or leachates, and is recyclable. Common uses include soft soil remediation, slope stabilization, structural void fill, and engineered applications for large residential, government and commercial buildings. The product is a frequently used material at infrastructure projects, such as highways and airports.

This video shows how InsulFoam GF Geofoam was successfully used as a lightweight soil replacement at an underground tunnel and parking structure. Engineers had determined that the excessive weight of soil (120 pcf) would place unacceptable dead loads upon the sloped portion of the tunnel transition to the parking garage.