DC is alight with the Pillar of Fire

“Exodus: Gods and Kings” is poised to be a winter blockbuster, but the Hollywood film isn’t the only epic drawing on the Biblical tale. The Pillar of Fire, a new sculpture in Washington, D.C., draws its inspiration from the Book of Exodus, and serves to honor healthcare workers on the front lines of the AIDS pandemic.

Located at the site of the old Whitman Walker Clinic at 14th Street and S Street, the sculpture is the creation of William Cochran, an artist known for his large-scale site-specific public art projects, and features 370 layers of cut and polished float glass post-tensioned into a concrete base with concrete footing. At night the work is illuminated to reveal slowly changing colors to represent an abstraction of the rainbow flag, according to promotional materials. 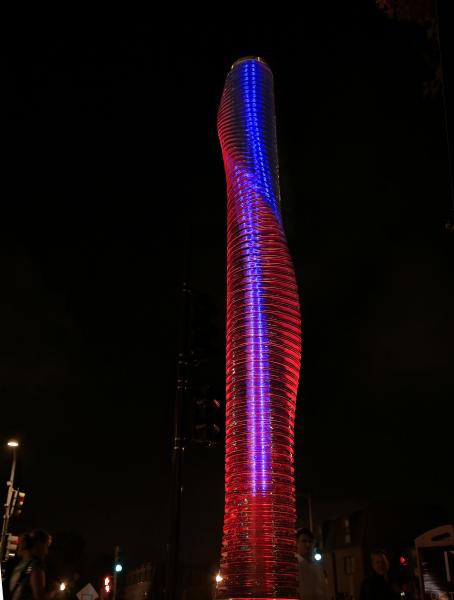 In Exodus, the Pillar of Fire was a manifestation of the divine, which guided the lost Israelites at night during their exodus from Egypt. In the Logan Circle neighborhood of D.C., the Pillar of Fire sculpture represents another kind of beacon: “In the dark early days of the pandemic, people were desperately ill with nowhere to turn, yet many called HIV/AIDS a plague from God and ostracized the sufferers. This kind of madness and fear was all too common then. Pillar of Fire represents the ones who brought light into that darkness. It honors the courage, compassion and selfless service of HIV/AIDs healthcare workers who developed and served at the Whitman Walker Clinic from  1987 to 2008,” Cochran said in a release.

“JBG companies [sponsors of the project] could have just put a plaque on the side of the building, but they truly wanted to honor the healthcare workers who showed us how to behave in a pandemic situation.  The healthcare workers served a population that was being refused medical services everywhere else,” he said.

The Pillar of Fire column is comprised of 370 egg-shaped layers of float glass. The slender column stands 16 feet high, weighs 2,000 pounds and is rigidly post-tensioned to 15,000 pounds. It was engineered by a structural glass specialist firm, Eckersley O’Callaghan in New York. It is made of individually shaped CNC-cut glass pieces with precisely oriented center holes, fabricated  from the artist’s patterns by GrayGlass Company of New York. The edges were left unpolished and buffed-seamed – layered glass with unpolished edges allows the sculpture to respond mercurially to changing atmospheric and lighting conditions by day.

At night, a slowly changing display of complementary colors combines with the shape of the sculpture to give a spiraling sense of “motion in stillness.” The colorful illumination is created by an internal and external programmable lighting system developed by John Coventry of Coventry Lighting of Chevy Chase, Md. Additional materials for the sculpture were provided by Acclaim Lighting of Los Angeles, Calif. 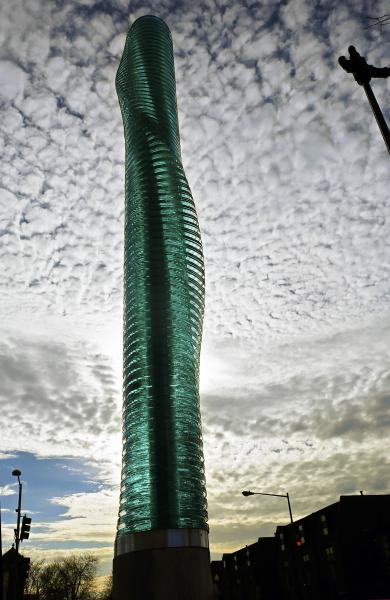 Cochran said he seeks to create art that contributes to sustainable cities and healthy communities. As was the case with the Pillar of Fire, he collaborates with city officials, public agencies, and nongovernment and cultural organizations, as well as leading engineers, lighting consultants and fabricators. This results in the design and implementation of large-scale public art projects that are known for careful architectural integration, design quality and craftsmanship.

Cochran also tries to engage the community in the process of creation and add to a neighborhood’s value. For instance, the well-known Community Bridge mural project in Frederick, Md., transformed a plain concrete bridge into a successful catalyst for revitalization and renewal. The bridge also attracts thousands of visitors annually and is the focus of ongoing educational tours. 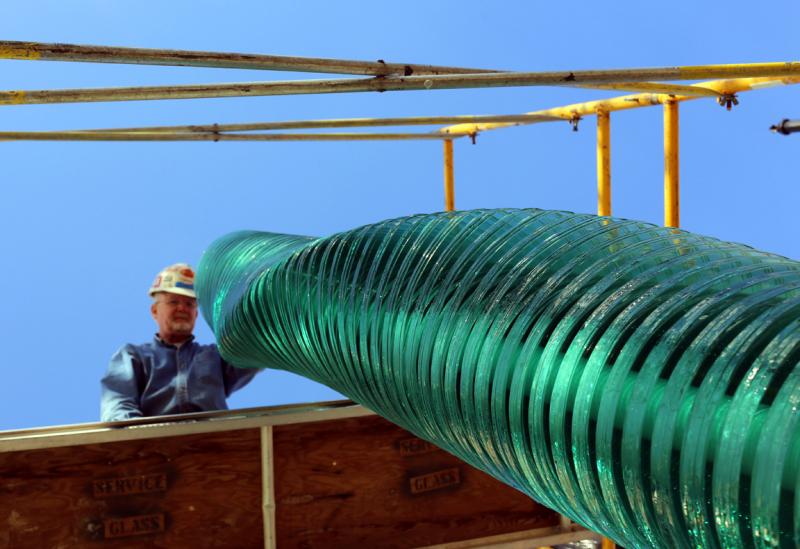