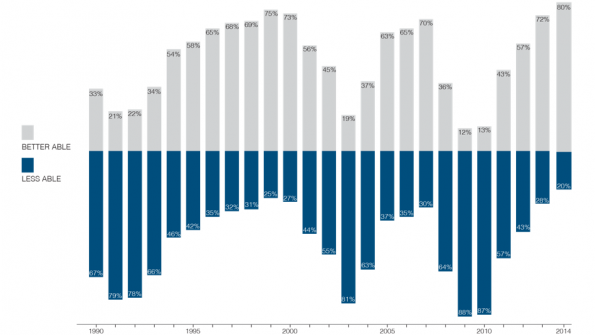 According to the National League of Cities, most of America's urban centers were better able to meet their financial needs this year compared to last.

Overall, cities are optimistic about fiscal conditions, according to a report from the National League of Cities (NLC).

The City Fiscal Conditions Report 2014 found that urban finance officers report that economic conditions are improving. However, fiscal health has not yet returned to pre-recession levels in many cities.

The report had three main findings:

First, more city finance officers reported improved conditions in 2014 than in the 29-year history of the survey; 80 percent of respondents reported their cities were better able to meet their financial needs in 2014 compared to 2013.

Second, for the first time since 2008, a majority of cities are reporting increases in the size of their workforces.

Third, general fund revenues are expected to stagnate as 2014 comes to a close, and expenditures are projected to increase slightly.

While the outlook is generally positive, many financial factors continue to plague urban centers, according to the report. The factors respondents identified as having the most negative impact include:

To deal with these increases and boost revenue, cities employed various methods. Some of the most common tactics included increasing the amount of fees charged for services, increasing property taxes and increasing sales, income or other taxes.

Looking beyond 2014, the NLC predicts a number of factors that will be key to the financial well-being of cities. These include:

Low numbers of high-paying jobs. Although employment is on the rise nationally, the fast growth of low-wage jobs will impact tax bases.

Changing patterns of property tax collection. Although the real estate market has rebounded, shifts in the market, including an increased number of renters, may impact cities’ bottom lines.

The Federal Government. Cities' fiscal conditions are vulnerable to outside policy changes. With continued cuts to aid, economic prosperity is uncertain.