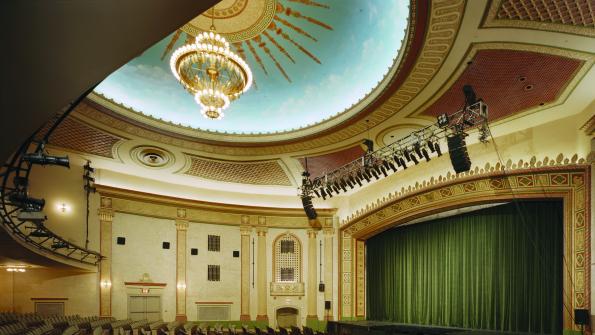 Making the case for historic theaters

The impact and importance of the performing arts on the cultural and economic life of American cities has been felt since the very first theater and vaudeville houses sprung up on Main Streets throughout the country.

The historic theaters that remain from the pre- and post-World War II eras, as well as those from the mid-20th century, represent innovative (and sometimes highly ornate) examples of some of the best architectural work of the day, by some of the most heralded architects of their time. Many communities have embraced their historic theaters, recognizing their social and economic value. Pittsburgh, Minneapolis, Cleveland and New York City are terrific examples of what’s possible when historic theatres are preserved and operated professionally, evident in both the quality of life in those cities and the economic benefit derived from their operations.

Investing in historic theaters, as with any worthwhile institution or venture, requires vision, planning and commitment. The oft-used phrase “it takes a village” is no stretch when thinking about the groups of individuals needed to make theaters viable. Theater professionals, community leaders, politicians and volunteers are critical to the success of fundraising, operating, programming and maintaining a performing arts venue. When a community’s residents become collectively invested in historically important buildings, there is a clear pride of place that follows.

Numa Saisselin, president of the 1927 Florida Theater Performing Arts Center, Inc., in Jacksonville, Fla., notes that the Florida Theatre’s activity generates about $7 million a year of economic benefit, which supports the full-time equivalent of over 200 jobs in addition to the 15 full-time and 253 part-time jobs on the theatre’s own payroll. In gathering the history of theaters in the Jacksonville area, Saisselin recently learned that “in the four-block stretch of Forsyth Street, which the Florida Theatre sits on, there used to be five other theatres. So the Florida Theatre makes downtown Jacksonville more attractive and economically viable today, but think what it could have been like today if anyone had been able to save those other theatres, too.”

Matt Schultz, CEO of the Historic Lansdowne Theater Corporation (HLTC), the not-for-profit owner of the 1927 Historic Lansdowne Theater in Lansdowne, Pa., tells a similar story. The Lansdowne, unoccupied since 1987, had fallen into disrepair. In 2007, the HLTC purchased the building through a grant from the Pennsylvania Department of Community and Economic Development. Since that time, the HLTC has renovated office and retail areas for occupancy, and recently completed the restoration of the historic marquee using a Community Development Block Grant from Delaware County.

Schultz reports that over the last several years there has been more commercial real estate activity and job creation, which he attributes to the restoration and the ultimate resurrection of the theater. “There are good buys on real estate now, and owners want to get ahead of the curve,” notes Schultz, who says residential real estate brokers use the Lansdowne’s progress and vision as a hook for locating in the Borough, noting how “great it would be to be able to walk to the theater from your house.” The HLTC estimates that 50 jobs have already been created by the promise of the restored theater and predicts that 300 hotel nights will be generated once the building is fully operational.

In Lansdowne, like many other small communities across the country, fundraising with a limited pool of residents and limited bonding capability is difficult. In addition to private funding, county redevelopment authorities, state government, federal government representatives and federal government agencies can all play a role in supporting historic theaters in their districts. Tax Increment Financing (TIFs) and other similar funding vehicles can be considered to help organizations obtain the funding needed to renovate, restore, and sustain historic venues. Local government can assist by acting as an advocate with state and federal government representatives; by adopting favorable zoning overlay ordinances that facilitate theater renovations; and by providing landmark status to historic buildings to help avoid demolition or significant alterations.

Saisselin says, “Fifty years from now, nobody is going to reminisce how well-timed the traffic light at Main and Ocean was, but they will talk about the theater, the great show they saw in the park, and what the town pool was like on a hot summer day.”  While revitalizing important historic theaters can clearly make good financial sense, the overarching reason for supporting and investing in shared cultural resources is because it’s just the right thing to do.  In Saisselin’s words, “It’s what makes us, us.”