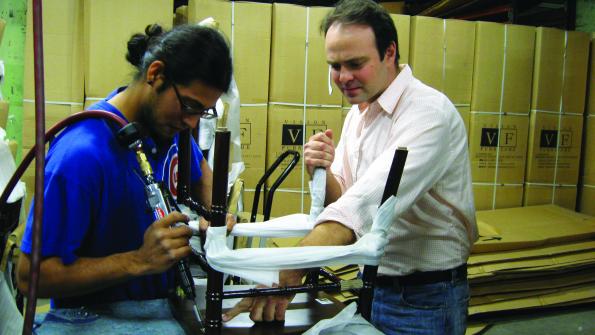 A few months ago, a gentleman from Rwanda walked through the door to interview as a finalist for a program funded by the John S. and James L. Knight Foundation. He had accounting and engineering degrees and was working on his MBA. He was a suitable candidate, but I was surprised that I recognized him; he was Jean, the man who parked my car almost every day.

Jean told me that despite his education he could not get a job as an accountant or engineer in the U.S. without additional coursework, and he needed to earn money to pay for school — so he parked cars.

Jean is not alone in being underemployed in Philadelphia. Twenty-nine percent of this city’s immigrant population are degree-holders — a higher percentage than the city’s native-born population — but many work in low-wage jobs such as driving taxis and parking cars. The Migration Policy Institute reports there are 32,000 unemployed or underemployed immigrants in Pennsylvania, and about half live in the Philadelphia metro region.

In addition to their role in helping our city become more vibrant, immigrants and young talent have been largely responsible for Philadelphia’s seventh straight year of population growth following 50 years of decline. The growth is good for Philadelphia, but how can we sustain it? Supporting talent is a critical element.

Talent is a major predictor of a city’s success; America’s cities are all working to attract it. Philadelphia has a good start, but we can do better by making the most of the skills of people like Jean.

When immigrants are recognized for the skills and the training they possess and are officially credentialed, they are free to start businesses, assume professional positions, have greater purchasing power and pay more in taxes. This gives our local economy the boost that it needs and maximizes the intellectual contributions these professionals make to our region. Immigrants benefit from making full use of their talents; Philadelphia benefits; and, in the final analysis, our country benefits.

That’s why Knight Foundation is leading the drive to retain talent here. One of our newest partners in this effort is the Welcoming Center for New Pennsylvanians, which helps open the door to economic opportunity for immigrants. Last year alone, the Welcoming Center received nearly 2,000 inquiries from skilled legal immigrants who are unemployed or underemployed.

We recently awarded the Welcoming Center $412,000 in support over three years so that it can add counseling services for skilled immigrants and assist them in obtaining U.S. credentials. We want to help immigrants build new connections and access networks in hopes of getting them to stay and thrive in Philadelphia.

The Welcoming Center is one of our local gems; it has a national reputation for its reports on the economic impact of immigrants and its guides for immigrant professionals. The center is led by a great team, including Peter Gonzales, a passionate and dedicated immigration attorney, and it was founded by Anne O’Callaghan, an immigrant physical therapist who had to get recredentialed in the U.S. We’re enthusiastic about their work and are sure they will assist Jean and others like him to receive their credentials to practice their professions in the U.S.