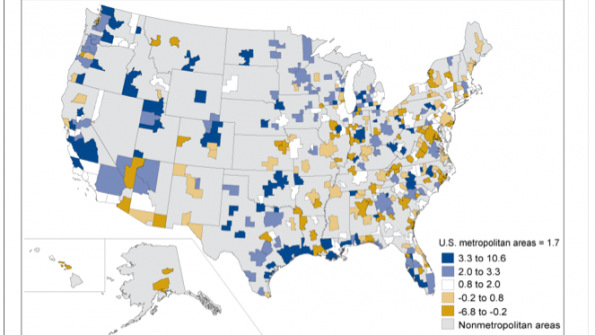 According to the U.S. Department of Commerce Bureau of Economic Analysis, real gross domestic product grew in 292 of the nation's 381 metro areas in 2013.

Real gross domestic product (GDP) increased in 292 of the nation's 381 metropolitan areas in 2013. Leading the pack was the greater Houston area, with greater San Jose, Calif., coming in second.

According to a report released by the U.S. Department of Commerce Bureau of Economic Analysis, growth was spurred on by gains in several markets, including finance, insurance, real estate, rental and leasing, nondurable-goods manufacturing and professional business services.

According to CityLab, although 173 metro areas saw economic growth above the 1.7 percent average, 86 cities, or 23 percent of all U.S. metros, saw economic declines. The top 10 performers were:

The 10 metros developing the least were:

For more information on economic development, read the full report.