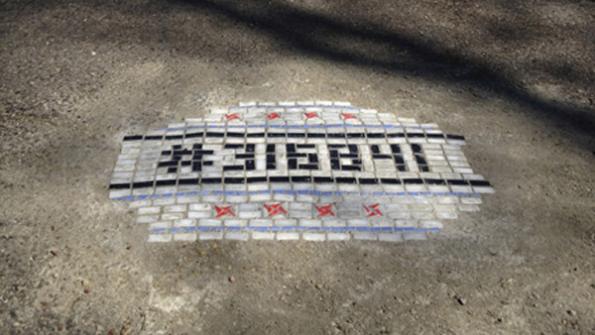 The Picasso of potholes: He’s making a dent in Chicago’s road crater inventory (with related video)

Mosaic artist Jim Bachor is filling potholes with works of art. It all started in Chicago where he lives. A year and a half ago, a pothole popped up in front of his home in the Mayfair neighborhood, and Bachor poured wet concrete into the broken road surface, and carefully squished in a mosaic and glass tile mural.

Folks sometimes get a chuckle from Bachor’s chuckhole art. Some of his patches show phone numbers to local auto repair shops, while others just have the word “POTHOLE” spelled out. North of downtown Chicago, a Bachor crater repair shows “#21914,” that is a measure of the enormous number of potholes that exist in the Windy City. Other Bachor street repairs display the Chicago city flag image.

Bachor (photo at right) looks for single potholes to repair that are close to the side of the roadway and not adjacent to other craters. He sets up orange traffic cones around the hole, trowels on some mortar (5 gallons or so) and presses in the mosaic mural. The patch sets in about 10 hours. Each pothole mosaic costs Bachor about $50 to produce.

Neighbors have thanked Bachor with coffee and pastry for his pothole-filling efforts. And to date, the city hasn’t told Bachor to knock it off. “In fact,” Bachor told GPN, “I have an artwork commission with the Chicago Transit Authority (CTA) that is being installed in one of the CTA’s Red Line train stations.” His work also hangs in numerous galleries. Bachor says he is open to accepting new art assignments and commissions in other communities. People can buy his art directly through his website. Bachor got his start as an advertising creative before switching to art full-time.

A trip to Italy in the late 90s, where he volunteered to work on a Pompeii archaeological dig, cemented Bachor’s interest in art that stands the test of time. In Italy, Bachor learned how to produce murals via the classic Ravenna method. That technique got its name from the former Roman capital where he attended workshops.

“An ancient mosaic looks exactly as intended by the artist who produced it over two millennia ago. What else can claim that kind of staying power?” asks Bachor. His craft communicates across the ages. “Using the same materials, tools and methods of the archaic craftsmen, I create mosaics that speak of modern things in an ancient voice,” he explains.

It’s not hard to find art, Bachor told GPN: Art certainly can be found anywhere. A lot of times it can be found when you reconsider things that you take for granted or have been around so long they don’t even register in your conscience anymore.”

On the subject of public art, Bachor offers this advice to city officials “When done well, public art is always a good investment. But it does need to be done well to pay off.”

Go here for results from American City & County’s latest pothole poll that asks where the $ comes from to fix potholes.

In the video, Bachor explains his efforts to patch potholes with works of art.