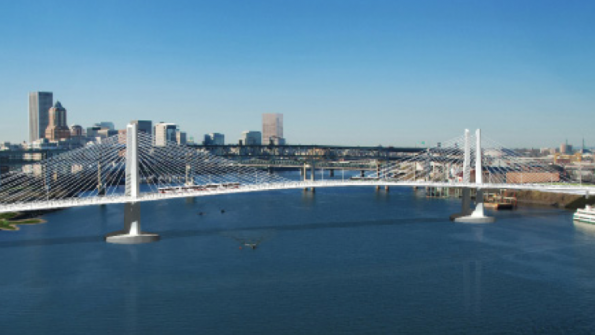 The Tilikum Crossing Bridge, located in Portland, Ore., will not allow passenger cars. No other bridge in the country is dedicated only to public transit and pedestrians.

Progress is being made on Portland, Ore.’s, Multi-Modal Tilikum Crossing Bridge, the first of its kind in the country.

What makes the bridge unique, according to CityLab, is that it will be off limits to cars. It will only carry MAX lightrail trains as well as Portland’s streetcar line and city busses, which demonstrates Portland’s commitment to alternative transportation.

"They're looking to the future and saying maybe automobiles were a big part of our past development, but going forward we're going to need a mix and a balanced system," Art Guzzetti, vice president of policy for the American Public Transit Association, told CityLab.

"What makes this [bridge] so unique is basically because it's a product of its environment. There's not a road network at either end of it, " Dan Blocher, executive director of capital project’s TriMet, the city’s transit agency, explained to CityLab. "Plus, we have this great redevelopment happening on both sides of the river, and we're going to carve it up with freeways on both sides? That's kind of a non-starter."

Started in 2009, the bridge is approximately 1,720 feet in length, its towers are 180 feet high and its average width is 75.5 feet, according to project materials.

From a distance, the bridge may look complete, however it still requires rail for the trackway, an overhead electrical system to power lightrails, handrails for multi-use paths and barriers between the trackway, bridge cables and multi-use paths, according to project materials. The bridge is scheduled to open in September 2015.

Of the bridge and the trend it represents, Guzzetti told CityLab, “as cities grow, their ongoing growth has to have transit. Automobile growth tends to be more spread out, and you can't spread out forever. Transit is more efficient from an urban development point of view. An urban core designed around transit can use about 9 percent of its land for streets and roads. A more auto-oriented area can use as much as 35 percent."

The total budget for the bridge was $134.6 million, according to project materials. Click here to learn more about its history and construction.