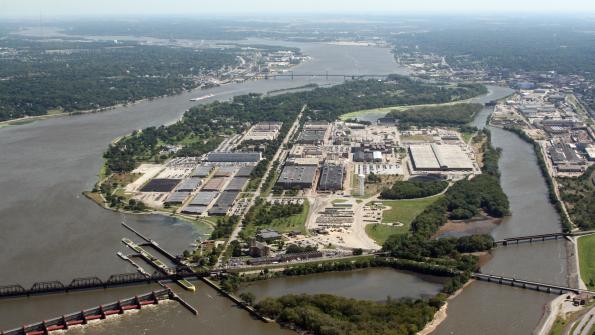 Large U.S. arsenal to get infrastructure improvements (with related video)

The U.S. Army has announced a $61 million infrastructure modernization project at the Rock Island Arsenal Joint Manufacturing Technology Center (JMTC) in Rock Island, Ill. The project will support infrastructure improvements at the industrial facility that will cut energy use by approximately 35 percent. The infrastructure initiative will generate up to $5.3 million in annual energy and operational savings. Minneapolis-based Honeywell Building Solutions is the contractor on the project. Honeywell’s headquarters is in Morristown, N.J.

The Army launched the technology center upgrades through a 20-year energy savings performance contract with Honeywell that was awarded by the U.S. Army Corps of Engineers’ Engineering and Support Center in Huntsville, Ala. Honeywell guarantees the improvements will generate the target savings, which should repay the investment used to fund the work. As a result, the project requires no capital or additional taxpayer dollars upfront.

“We have been providing the best products and services to our armed forces for more than 150 years,” said Col. David J. Luders, commander for RIA-JMTC. “This project lets us tackle our aging infrastructure head on — a difficult task in light of budget cutbacks — so we can operate as efficiently as possible and support mission readiness.”

The 1.5-million-square-foot JMTC manufactures a wide variety of metal parts and systems for the Department of Defense, and is part of the Rock Island Arsenal Garrison located in Rock Island, Ill., the largest government-owned and operated Arsenal in the U.S.

As part of the project, Honeywell will implement a variety of facility improvements, which includes installing high-efficiency HVAC systems, such as on-premise natural-gas heating that will allow the facility to disconnect from the Garrison’s central coal-fired steam plant. Another major upgrade is new plating and paint systems for the technology center. Almost 90 percent of the parts produced at the facility go through plating and paint. The surface coatings are needed to ensure hardened, durable components for Army equipment.

“Why pay bills that are higher than necessary because of energy waste?” said Paul Orzeske, president of Honeywell Building Solutions. “By improving overall efficiency, we’re able to use part of the current utility spend to solve complex infrastructure challenges. JMTC is a cornerstone of the community, and its aggressive approach to energy management will help ensure its legacy of service and support to the military and country.”

The project will save nearly 5.5 million kilowatt-hours of electricity each year — enough energy to power almost 490 homes on average. In addition, the project work is expected to deliver environmental benefits. As a result of transitioning to natural gas heating, for example, annual coal use at the central plant will drop by approximately 12,000 tons.

With one of the largest Environmental Protection Agency air permits in Illinois, the project will reduce the Garrison’s eco-footprint. The initiative will cut an estimated 63 million pounds of carbon dioxide each year, the equivalent of removing more than 6,300 cars from the road.

The Army began the project in January and expects to complete the upgrades by the first half of 2017.

Honeywell has completed more than 5,000 guaranteed savings projects in buildings across the globe. The initiatives will trim energy and operational costs by more than $5 billion. This includes upgrades to 150 U.S. government facilities. The company provides energy-saving technology and services.

This video explains the energy savings that will be achieved in the modernization of the Joint Manufacturing and Technology Center at Rock Island Arsenal.