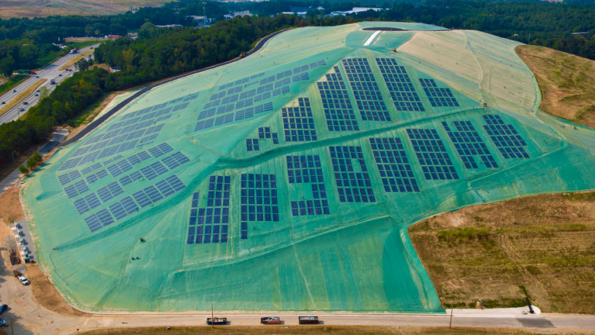 The rise of solar landfills

Across the country, municipalities are installing solar panels on capped landfills to cut down on costs and become more sustainable.

Solar energy systems are becoming an increasingly popular development trend on both publicly and privately owned landfills as a means to put unused land into productive, revenue-generating use. More and more municipalities across the country are installing solar panels on their capped landfills and saving on energy costs, as landfill sites are ideal for solar project development because they are typically close to interconnection systems and are built on land that has already been cleared and generally can’t be used for commercial development.

More than 6,000 landfills in the United States were capped from 1988 to 2009, and many are still sitting idle, which demonstrates the tremendous potential for more development. The majority of landfills in the United States are also located in the sunniest regions of the country—nearly 40 percent in the West and 35 percent in the South—and typically in states with solar-friendly policies.

Environmental agencies on both state and national levels are actively promoting landfill solar development by assessing potential sites, providing funding and offering educational tools for landfill owners looking to go solar. Massachusetts is one of the leading states for landfill solar development, with dozens of recently completed landfill projects under its belt totaling more than 63 megawatts (MW) of solar energy production.

Many landfill owners are taking advantage of power purchase agreements (PPAs) to go solar without any upfront costs. PPAs allow a third-party investor to take on the design, finance, installation and ownership and maintenance (O&M) costs of a project, while the host customer agrees to buy the power back at a predetermined rate, typically less than what they’re paying for electricity. The key to PPA financing is that it allows third-party investors to monetize the federal tax incentives (30 percent investment tax credit (ITC) and accelerated depreciation), that tax-exempt entities would otherwise forfeit.

The only active landfill in Vermont, located in Coventry, is currently in the process of going solar without any upfront costs to its system owner, Casella Waste Systems, thanks to a PPA. The 2.7 MW system is expected to generate approximately 3,199 megawatt-hours annually, enough to power 261 homes for an entire year. The system will be installed on the landfill’s buffer zone, next to an existing 8 MW gas-to-energy generating facility that utilizes methane captured from both the active and capped sections of the landfill. The power generated from the landfill in Coventry will be sold to Vermont Electric Power Producers under the state’s Sustainably Priced Energy Development (SPEED) Standard Offer Program—one of the nation's first feed-in-tariff programs.

The Town of Dartmouth, Mass. also used PPA financing to install solar on the town’s former landfill without any upfront costs. The 1.4 MW installation will save the Town $105,000 annually and $3 million over the course of the 20 years PPA term. Dartmouth has seen a handful of other solar projects under development within the past few years and now ranks first in solar energy production within the entire state. The Town is also using its investments in solar for economic development initiatives. Through a partnership with Southeastern Environmental Education Alliance (SEEAL), UMASS Dartmouth students are given solar project development and energy efficiency training.

As yet another example of how solar benefits landfill owners, the City of Metheun, Mass. received a $35,000 grant from the Massachusetts Department of Energy, which, combined with PPA financing, allowed the City to install a solar energy system on its former landfill without any upfront costs. The 1.3 MW installation is saving Methuen approximately $80,000 per year. The City is also taking advantage of net metering credits available from a 4 MW solar installation in Lancaster and a few additional projects within the state. Combined with the Methuen School Department’s solar initiatives, the combined savings are projected to be $575,000 per year, a total energy cost reduction of approximately 25 percent.

Solar adoption is a great opportunity for municipalities to generate additional revenue and offset any costs of landfill maintenance. Going solar also has the added benefits of bolstering the local economy by creating jobs and helping to further the adoption of clean energy. Whether installed on a capped landfill or unused, flat space on an active landfill site, solar can generate huge savings. By consulting a trusted and experienced solar developer, municipalities, whether they’ve looked into solar in the past or not, can determine if going solar is the right choice for their sites today.