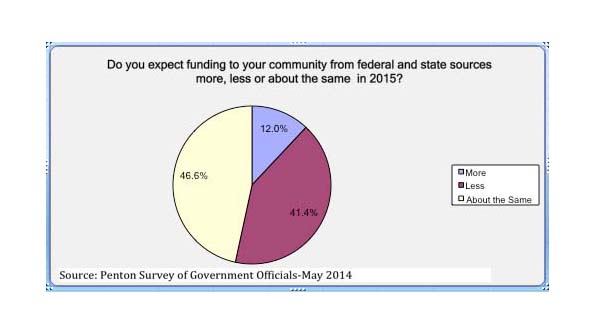 Local government officials from Fairfax County, Va., and Columbus, Ohio, see some positive signs in the economies in their communities.

In local governments, things are looking up. Economic signs are good in Fairfax County, Va., says Gerald L. Gordon, who is president and CEO of the Fairfax County Economic Development Authority (FCEDA). “Job growth in the county remains positive and the present unemployment rate is only 4 percent. The growth in the job base is expected to continue over the next year.”

(Editor’s note: The national unemployment rate stood at 6.3 percent in May 2014, according to the U.S. Bureau of Labor Statistics.)

Gordon (photo at right) says that Fairfax County has a significant federal government presence, but that the FCEDA implemented policy several decades ago to ensure that the Fairfax County economy would not ever be overly dependent upon it. “As such, the FCEDA sought to diversify the local tax base and, over the years has had substantial success. This includes the attraction in the last decade of the corporate headquarters of such world-class, non-government contractors as Hilton Worldwide, Volkswagen North America, Intelsat, the Global Services Division of Bechtel and many more.”

Gordon sees other positive signs that will keep Fairfax County budgets strong. “The office space market in Fairfax County continues to grow despite a significant current vacancy rate. This is due to the advent of the Silver Line Metro stations (four in Tysons Corner, four in Reston and Herndon, and one at Washington Dulles International Airport, on the county’s western border), as well the Base Realignment and Closure (BRAC) military base relocations to Fort Belvoir. The latter action is driving demand in the southeastern quadrant of Fairfax County for new office construction.”

Regarding a federal government presence that was mentioned by Gordon above—Another reason government officials are optimistic as we start the second half of 2014 is that almost 60 percent of government respondents to an exclusive E-survey of Penton magazine subscribers expect their communities to get more or about the same funding from federal and state sources in 2015. The survey, which gathered responses from 250 government officials, polled readers of Government Product News, American City & County and Government Procurement.

Mayor Michael Coleman of Columbus, Ohio, who is chair of the U.S. Conference of Mayors’ Council on Metro Economies, sees some good fiscal trends in his jurisdiction. “Our budget is strong, thanks to the sound management of our city government and

the wisdom of our voters, who have consistently supported investments in operations and infrastructure.”

But, Coleman (photo at left) says, there are areas of concern. “While the national economy is poised to accelerate this year, thanks to steady improvements in employment, income and housing, many city budgets are hurting around the nation.”

Coleman says city budgets have been under pressure due to residents’ need for services during the Great Recession. In other cases, Coleman told GPN, “some states, to alleviate their own budget difficulties, have shifted the burden to their cities. And some cities’ economic recoveries simply are lagging behind other parts of the nation.”

Due to all of the above factors, says Coleman, “It is more important than ever that we are aware of and responsive to the needs of our cities during this time.”

The Govalytics team shares GPN’s confidence about the local government market in the second half of 2014. Govalytics, in fact, has just expanded its coverage to the top 50 metropolitan statistical areas (MSAs) in the U.S. that encompass 2,052 of the largest local governments.

Mike Belarmino, who is associate legislative director/associate general counsel at the Washington-based National Association of Counties (NACo), is getting mixed signals about county government budgets. “The best way to describe it is that we are still looking at a mixed bag here. At the beginning of this year, we conducted a study where we looked at county economies, and in that survey we saw that the recovery is still a mixed bag for everybody. Some counties are fiscally strong, and others are just getting there, climbing out of the recession.”

Two of the top priorities for counties, says Belarmino, are transportation and infrastructure spending. He says a lot still hangs in the balance for those NACo priorities. “The big question that remains,” says Belarmino is, “Will Congress figure out the MAP-21 reauthorization?” Funding for the 2012 Moving Ahead for Progress in the 21st Century (MAP-21) Act, though, runs out on Sept. 30. MAP-21 is a key source of funding for highway and transportation construction.

Michael Keating is senior editor for Government Product News and the GPN web site. He can be reached via e-mail at [email protected]