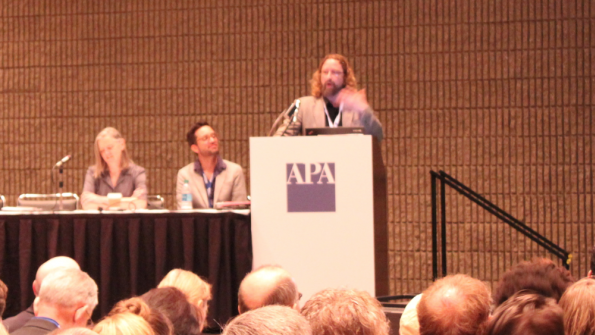 San Diego, Seattle and Pittsburgh all had issues getting the community engaged, but with some outside-the-box tactics, these cities really got residents talking.

Community engagement is a difficult issue to tackle, but outside-the-box tactics in San Diego, Portland and Pittsburgh have those communities interacting like never before.

“Pop-up outreach” is what Diego Velasco, of the MW Steel Group, an architecture and urban planning firm in San Diego, called his efforts to engage the Encanto neighborhood during a speech at APA’s National Planning Conference on Monday.

Velasco says development in the economically-depressed region was needed, but getting the community involved was a difficult process. Traditional methods of public meetings were limited in their impact, at best. He said planners needed a “low-tech, high-impact” solution.

One answer? Chalkboards. Chalkboards were placed in community gathering places, such as transit stations, schools and coffee shops with questions such as “What would you like to see in your community?” written on them. Residents were encouraged to respond on the board, but the tactic was also an effective conversation starter.

“Within an hour at the Starbucks, people were having conversations about their community,” Velasco said. These chalk-written responses were documented, logged and incorporated into the planning process.

Seattle, too, was having issues with engagement. Patrice Carroll, of the city’s planning office, says that traditional public hearings and meetings were only attracting a certain type of “super-citizen” – those already completely engaged. New tactics were needed to hear new voices.

Seattle’s Open House ++ program was adopted to diversify the feedback heard from the community. Partnering with unorthodox organizations and holding meetings in atypical settings attracted a new type of attendee to these meetings. While attendance in the past could be counted on both hands, some of these new audiences measured in the hundreds, says Carroll.

One of Pittsburgh’s problems is its division, says Morton Brown, director of Pittsburgh’s public art program. Made up of 90 fiercely loyal, mostly isolated neighborhoods, the city has issues communicating as a whole. To combat this isolation, the “Talk PGH” mobile talk show was introduced.

An aquarium-like box truck with glass side panels was outfitted to look like a talk show set, and drove around to each of the city’s neighborhoods interviewing residents about issues important to their community. The hundreds of videos produced by the talk show were edited and uploaded to YouTube, which started the city talking about holistic improvements, Brown says.

To hear questions raised by the audience during the discussion, watch the video below.