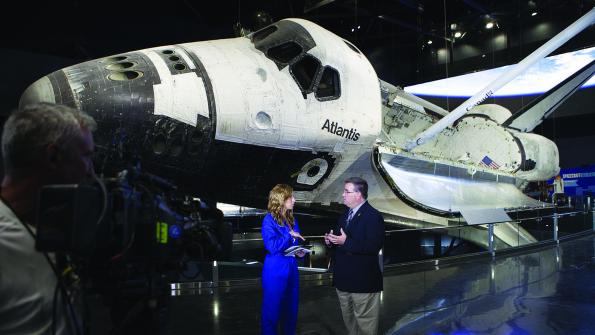 Still shooting for the stars

Brevard County, Fla., rebounds despite the closure of the NASA space shuttle program

Not long after the wheels of Space Shuttle Atlantis rolled to a stop on the runway at Kennedy Space Center, marking the official end of NASA’s space shuttle program on July 21, 2011, a somber-toned 60 Minutes report focused on the end of an era for Brevard County, Fla.’s designated “Space Coast.”

“What comes after reaching for the stars? For many in Brevard County, a hard landing,” reporter Scott Pelley mused.

Prognosticators forecasted skyrocketing unemployment, with some predictions reaching as high as 17 percent – numbers fueled by the loss of the 8,000 direct shuttle jobs and an additional 5,000 indirect/spinoff jobs. This, coupled with the housing crisis and anticipated setbacks in the business community and tourism industry, saw space workers leaving Brevard County for jobs.

But while Brevard residents felt the initial downturn, it turns out that “hard landing” was really more of a kick start.

Shuttle program-related layoffs started even before July 2011. Yet, the county’s rally to stifle the anticipated job losses was already well underway. Between January 2010 and September 2013, Brevard County had already announced 4,921 new jobs.

In the three years since the shuttle program ended, Brevard County’s unemployment rate never hit 12 percent. Instead, the January 2014 jobless rate of 7 percent – down 2 percentage points from January 2013 – reflects the county’s galactic effort to attract and retain businesses. That effort includes tax incentives backed by the state and Brevard’s Board of County Commissioners, which have helped establish the county as a hub for aeronautical industries and businesses like Brazilian luxury aircraft maker Embraer S.A. and defense contractor Northrop Grumman. It’s also the result of an aggressive Economic Development Commission (EDC) of Florida’s Space Coast, efforts by Brevard Workforce (now CareerSource Brevard) to retrain skilled workers, and steadfast support by county leaders.

These multi-faceted approaches have helped the county realize a decline in foreclosures, an uptick in home sales and prices and a steady drop in the unemployment rate. Since July 2011, Brevard has reaped 26 business expansions and relocations representing 3,301 announced new jobs and over $525 million in capital investment.

“We’ve got a positive story to tell,” County Manager Howard Tipton says. “It’s not just about recovery; it’s about thriving in the world marketplace.”

Unemployment numbers are expected to decline even more in the wake of a recent announcement by Embraer to expand its Melbourne-based production complex. Brevard County commissioners approved a multimillion-dollar tax incentive package toward the Embraer project, but also awarded a grant that helped lure an unidentified company, code-named “Project Magellan,” which expects to announce plans soon for a major development at Melbourne International Airport. Both projects entail major capital investments of nearly $600 million, but should also generate an estimated 2,300 high-paying jobs in Brevard County.

With the development of these two major aerospace industries, the county will have accounted for all of the jobs lost from the shuttle program shutdown. “Nothing is taking place in this country right now like this,” Lynda Weatherman, executive director of the EDC, says. “We’ve proven to the country that not only can this community mitigate the job loss, but we can go beyond that and be even more healthy.”

Weatherman credits the EDC, Florida Gov. Rick Scott, and the pro-business attitude from airports, municipal leaders and the community at large for Brevard’s successes.

Though manned shuttles are no longer being launched from Kennedy Space Center, rocket launches from Cape Canaveral Air Force Station continue to be a tourist draw for the county. Kennedy is gearing up for commercial launches of astronauts and a planned launch of a new exploration rocket in 2017.

And it’s not only rockets that draw tourists to Brevard County. Locally referred to as “Orlando’s closest beaches,” Brevard County’s coastlines continue to see an estimated 6 million tourists annually – an economic impact of $3 billion. Local, state and federal dollars are currently funding a nearly $40 million beach renourishment project along areas of the county’s 72-mile-long shoreline.

Tourists and residents alike are smitten by Brevard County’s environment and natural resources. The county is creating partnerships and working with state leaders to help clean up Indian River Lagoon. Though it touches six counties, 70 percent of the lagoon’s surface water is in Brevard.

And Brevard County continues to remain a great value for residents. Though it’s the tenth-largest county in the state, Brevard is ranked 60th among Florida’s 67 counties in tax burden.

“The economic turnaround seen on the ‘Space Coast’ isn’t unexpected given the talent pool, the location and the quality of life,” Tipton says. “Like going to the moon, we have a history of expecting and delivering big things.  It’s just who we are as a community.”