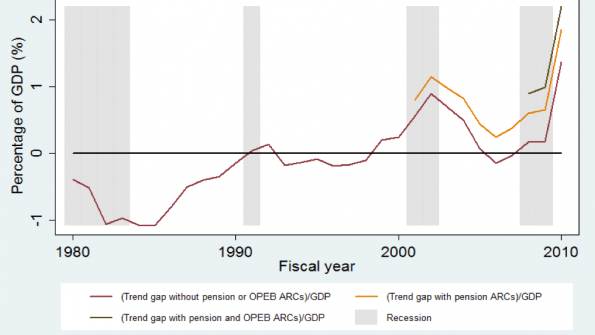 Spending on pensions and other benefits must be reined in for local and state governments to remain financially sustainable.

By looking at a new measure of state and local government fiscal sustainability (known as a “trend gap") analysts for the Federal Reserve have demonstrated the discrepancy between long-term governmental obligations and income has been growing for the past 30 years. Unless this gap is closed, state and local governments can expect to raise taxes, cut social services and see credit ratings suffer.

Citing figures from the U.S. Census Bureau and the National Association of State Budget Officers, the Shorenstein Center, a division of the Harvard Kennedy School, reports that while the most recent figures show that state and local government revenues have increased nationwide since the 2008 recession, growth for 2014 will be essentially flat nationwide.

One of the main reasons for this slump is the continuing rise in costs for state and local governments’ long-term obligations. The Shorenstein Center reports that from 1990 to 2004, Medicaid spending grew 10 percent annually, outpacing the 6 percent annual average of state revenue growth. In 1987, healthcare care costs made up 16 percent of local and state government spending, and today they represent 31 percent. For the past decade, pension costs increased almost 9 percent annually, and in 2012, unfunded pension liabilities were estimated to be $4 trillion nationwide.

With this in mind, how does one understand a local government’s financial sustainability in the long-term? According to a working paper from the Federal Reserve, one measure is called the “trend gap,” which takes into account actuarially required contributions (ARCs) to pension and other post-employment benefits (OPEB), and removes short-term fluctuations of the business cycle.

Based on data from the U.S. Census Bureau, the Annual Survey of State and Local Finances, the Pew Center on the States and other resources, the study found:

Nationwide, the gap between local government income and spending on mandatory obligations has been growing over the past three decades. The nationwide per-capita trend gap without pension or OPEB ARCs was above zero during most of the 2000s, with the full trend gap, including pension and OPEB ARCs reaching $1,000 per capita in 2010.

According to the report, failure to archive financial sustainability will have several negative consequences:

For more information on the trend gap, download a full .PDF of the report here.