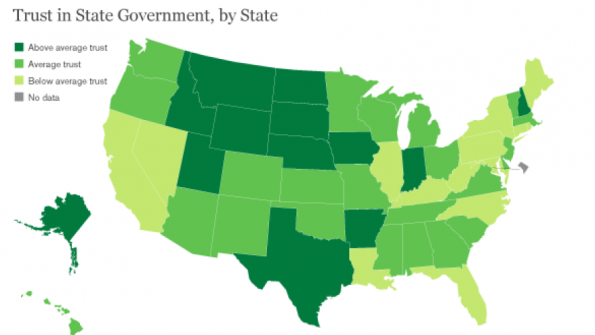 North Dakotans trust state government the most, Illinois the least

A new Gallup poll measured how much faith residents put in their state governments.

Illinois residents are the most skeptical in the nation of their state government’s ability to handle important issues, while those in North Dakota trust their government the most.

That’s according to a new Gallup poll on resident’s trust in their state governments. The poll, conducted June-December 2013, interviewed at least 600 residents in each of the 50 states to gauge how much faith constituents have in their state leaders.

The state governments residents trusted the most include: North Dakota, with 77 percent of residents expressing a “great deal” or “fair amount” of trust in their state government, followed by Wyoming, with 76 percent, Utah with 75 percent, South Dakota with 74 percent, Nebraska with 73 percent, Texas with 72 percent and Alaska with 71 percent.

The Washington Post points out the seven states' residents found most trustworthy were all red, while six out of the seven least trustworthy were blue, Louisiana being the exception. But depsite the seeming red/blue disparity, overall, it appears more residents trust their state governments than not; Gallup found the national average of those expressing a great deal or fair amount of trust was 58 percent. Even among the "least trusting" states, four of the bottom seven still ranked their levels of trust above 45 percent.

Gallup suggests that Illinois’ lack of faith isn’t surprising – the last two governors of the state, Ron Blagojevich and George Ryan, were both sentenced to jail for crimes committed while in office. Governors from the ’60s and ’70s also ended up behind bars.

Economics, also, may be a contributing factor in a residents' mistrust, the survey found. Several states where a majority of residents lacked faith in the state government, such as Rhode Island, Maine, Pennsylvania, Louisiana, California and Maryland, have suffered from economic stagnation in years past.   Healthier economies were generally associated with higher levels of governmental trust, Gallup says. Five of the six states with the lowest unemployment rates in the nation had trust scores of 73 percent or greater.

To read the full report, or see where your state falls, click here.