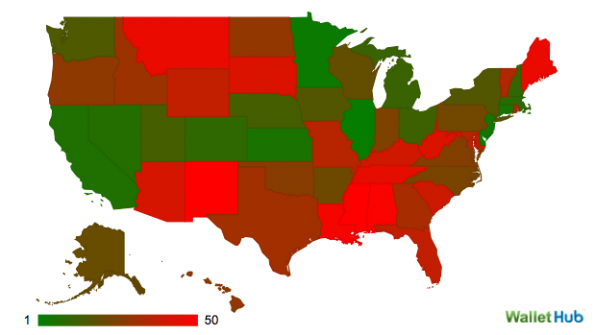 Fiscal responsibility and individualism are touted heavily by GOP leadership, but a new report shows red states are, on average, more dependent on federal aid than their blue counterparts.

Red states are, on average, more reliant on federal funding than their blue counterparts.

That’s according to WalletHub, an online personal finance resource, which compared the  50 states as well as the District of Columbia on three primary metrics: return on taxes paid to the federal government, federal funding as a percentage of state revenue and number of federal employees per capita.

By comparing states using these criteria, WalletHub found the least dependent were:

The most dependent states were:

The study found a 34.4 percent correlation between a state’s federal dependency and its tax rates, meaning the more dependent a state is on the federal government, the less likely it is to charge higher taxes.

WalletHub suggests particular states can afford to keep taxes artificially low because they are receiving a disproportionate amount of federal aid. According to the study, “That would change the narrative significantly, revealing federal dependence where bold, efficient stewardship was once thought to preside.”

To find out more, or see where your state ranks in terms of federal dependence, read the full report here.

So how does the tax burden break down, state-by-state? In the 2014 Report on the States with the Highest & Lowest Taxes, WalletHub compared all 50 states and the District of Columbia to the national median in terms of 10 different types of taxation, ranging from state and local income tax to alcohol and telecomm taxes.

The group found the average American family is taxed around $7,000 annually, but the state in which a person resides is a major determinant on tax burden. Taxpayers in New York, the state with the highest rates, pay nearly four times more than those in Wyoming, the state with the lowest taxes. Generally, "red" states pay lower state taxes than "blue" states.

Wallethub says certain states can afford to keep taxes "articifically low" because they are receiving a disproportionate amount of federal aid (map above). According to the study, "That would change the narrative significantly, revealing federal dependence where bold, efficient stewardship was once thought to preside."

The ten states with the lowest taxes, according to the report, are:

The ten states with the highest taxes, according to the report, are:

To find out more, or see where your state ranks, read the full report here.