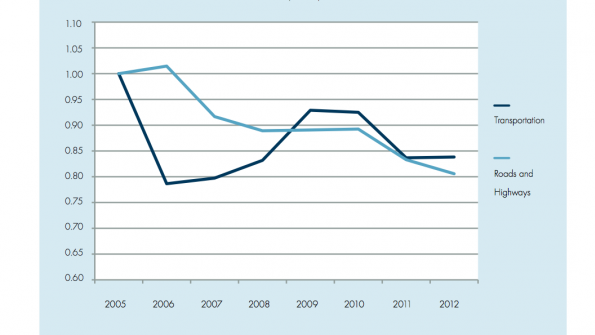 By using new analytical methods and improved data collection, The Progressive Policy Institute (PPI) found evidence that government-supported infrastructure projects have a positive “spillover” effect on local economies. Simply put, for every dollar a government spends on transportation infrastructure, the increase in local economic growth is between $1.5 and $2.

These numbers counter claims by conservative economists and politicians, who have argued that government spending on infrastructure projects crowds out public sector hiring. In 2009, when arguments over the size of the American Recovery and Reinvestment Act were at their height, over 200 conservative economists expressed skepticism over federal spending on infrastrucutre projects. “We the [200] undersigned do not believe that more government spending is a way to improve economic performance,” read a statement issued by the Cato Institute at that time.

According to PPI materials, the result of this attitude has been less spending on critical road, bridge and transportation projects.

However, after looking at several studies conducted since 2009, using a wide variety of data sources and analytical techniques, PPI has found the "spillover" (economic multipliers caused by governmental infrastructure spending in a local economy) to be significant.

But, according to the PPI report, local and state government investment in transportation infrastructure has been failing at an inopportune time. The American Society of Civil Engineers (ASCE), in their 2013 infrastructure report card, ranked the nation’s roads, aviation and transit systems with a “D,” its ports with a “C” and its bridges a “C+.” The ASCE recommends fixing issues immediately, as deferred action will increase future costs. With few exceptions, most notably in Texas and Maine, state and local government spending on infrastructure projects is at a historic low, falling 20 percent since 2005.

In 2009, the American Recovery and Reinvestment Act offset this decline in spending. The act made available almost $50 billion for transportation infrastructure projects, including $26 billion for roads, highways and bridges and another $18 for high-speed rail and other public transportation projects, but this funding has since dried up as the ARRA stimulus ended in 2011.

Evidence shows, however, that spending on such projects should increase if economic growth is the goal. One study cited in the report, conducted in 2013 by the McKinsey Global Institute, calls transportation infrastructure investment a potential “game changer” for the U.S. economy. The McKinsey analysis found that spending an additional $150 to $180 billion annually through 2020 on transportation infrastructure could result in a boost to the economy in the range of $270 to $320 billion.

Put another way, by increasing the amount spent on transportation infrastructure by 1 percent of the gross domestic product, McKinsey Global Institute estimates a boost to the economy of 1.8 times that amount.