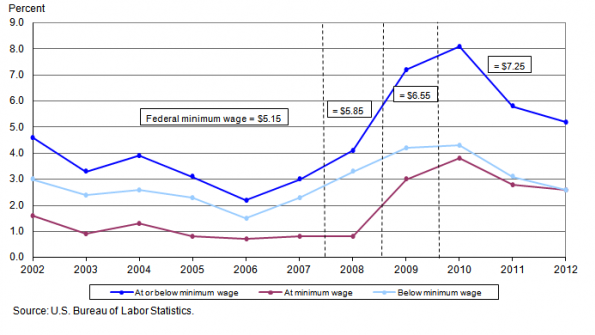 A study released by Public Policy Polling found that even in “red” states, increases to minimum wage are supported, regardless of party affiliation.

Despite controversy, hikes to minimum wage are gaining bipartisan support. A new study released by Public Policy Polling shows that in at least two deeply "red" states, Georgia and Kentucky, voters favor increases regardless of party affiliation. Furthermore, the organization found this sentiment may become an important factor in Fall 2014 elections.

Currently, the federal minimum wage is $7.25 per hour, however, according to the U.S. Department of Labor, several states have set their rates higher, including California, New York, Florida and Washington. Leaders on the right side of the political isle tend to oppose such measures, claiming hikes to minimum wage may hurt job creation, but Georgia and Kentucky voters favor boosting their states’ minimum wages to $10 per hour, regardless of political leaning.

The study found that, in addition to overwhelming support from Democrats, the proposed increases have an unusual amount of support from Republicans. 40 percent of Republicans polled in Kentucky and 27 percent in Georgia supported minimum wage increases. Public Poling Policy reports the findings in Kentucky and Georgia mirror what they have found in other red states.

According to the Living Wage Calculator, a tool designed by the Department of Urban Studies at MIT to estimate the cost of living for low-wage families, the living wage, or the hourly rate needed to maintain a reasonable standard of living, in Georgia for a family of four is $18.55. In Kentucky, the wage needed to support the same family is $17.18.