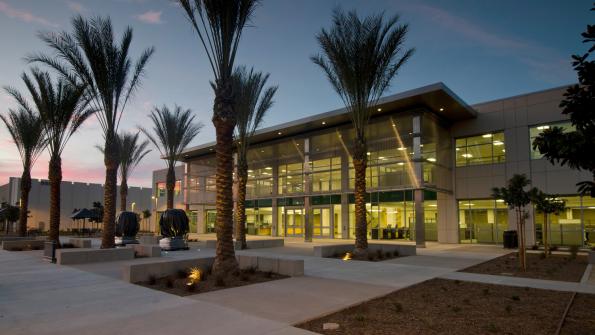 The Kearny Mesa district in San Diego, Calif., recently completed the last phase of a three-part project – the construction of a new County Operations Center. According to RJC Architects principal James Robbins, “The center’s [old] buildings have been here for close to 50 years.”

San Diego officials decided it was time to upgrade, renovate and modernize. Previously, the city housed two very old buildings on two different sites. To not only provide some necessary renovation but also to create convenience was to create a single, much larger building. The final phase concluded with the construction of the 118,500-square-foot Registrar of Voters Headquarters, including staff offices, ballot processing facilities, warehouse space and the installation of a public art facility.

Employees working inside the old office buildings were burdened with having to relocate at the time of construction. Senior Vice President of Lowe Enterprises Mike McNerney said in a statement: “The old buildings will be demolished once the employees have relocated. We have to make sure the county can continue to operate while construction is going on, so we’ve had to get employees and guests around. We have a shuttle program and parking program to help with this.” McNerney says workers have also had to cope with maneuvering on a site that hasn’t seen major construction in four decades. “The entire site was built out 40 years ago,” he says. “We had to do a lot of research to determine where existing utility lines were, and had to keep a 24-hour phone line open to the sheriff’s department.”

Funding sources were a reimbursement from the San Diego Regional Building Authority and an Operating Transfer from the County General Fund. Mike Berryhill, project director for ROEL Construction, says county officials had to undergo a funding process at the completion of each phase of the project to determine the scope of the next phase. A Lowe representative said approximately $350 million has been invested in the project to date and the county of San Diego funded 100 percent of the costs. Funding was part of the county’s stimulus plan, the first phase being broken up into two segments because of “fiscal woes” as described by San Diego County Board Supervisor Ron Roberts.

As part of a multi-phase redevelopment, the Center will eventually support as many as 4,000 employees in 1.1 million square feet of office, laboratory and operations space. The new campus is comprised of more than a million square feet of modern, efficient office space, along with two multi-level parking structures.