Transportation funding expert John Kiernan says tolls may not be a solution to pay for repairs to deteriorating U.S. bridges.

One in nine bridges in the U.S. is structurally deficient, according to “The State of Our Nation’s Bridges 2013” report from the Washington-based Transportation for America Coalition.

The report notes that in 2012, “Congress introduced a wild card into the mix by passing legislation that eliminated a dedicated fund for bridge repair in the renewal of the federal transportation program, known as MAP-21. Instead, states are directed to set standards that they expect to meet for repair, but with limited enforcement in case of failure. The upshot is that bridge repair now must compete with other transportation needs.”

Highway departments are looking to tolls for funding to pay for bridge repairs and upgrades. Some 42 states and the District of Columbia now have some form of tolling authority, agency or facility, says the Denver and Washington–based National Conference of State Legislatures, and many of the agencies are boosting tolls.

A group of transit advocates is pushing a comprehensive plan to toll New York City’s bridges through congestion pricing. Revenue created would go toward maintenance of the city’s bridges as well as funding for the Metropolitan Transportation Authority (MTA).

But tolls have some limits, says attorney John Kiernan (photo at right) who is with Davidoff Hutcher & Citron, a full service law and government relations firm in New York. Kiernan is also the former chief counsel to the New York State Senate Transportation Committee when the committee put together the first 5-year capital plan for the MTA in 1981. 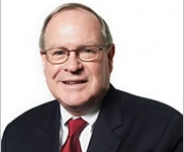 “Tolls are not the answer when it comes to repairing bridges because the vast number of bridges in a state of disrepair are not toll facilities,” says Kiernan, who adds that “Thousands of bridges across the country need improvement.” Bridges of all shapes and sizes, adds Kiernan, are not suited for tolling.

Recent flooding in the western states, noted Kiernan, washed out many bridges. Those structures, said Kiernan, “were not designed for tolls and are not toll bridges, but they are bridges nonetheless, and many of them are in a state of disrepair.”

Kiernan told GPN, “There needs to be a dedicated funding source, such as a portion of the gasoline tax, motor vehicle fees or a part of the sales tax. For instance, more than 30 years ago the New York State Legislature passed a ¼-cent sales tax to fund New York’s MTA. The same type of ‘carve out’ is needed for bridge repairs.”

The monies, raised, says Kiernan, “should go into lockbox, so that it doesn’t get raided to pay pension funds or to pay for another government function — it’s got to be a dedicated revenue source.”

In the second part of GPN’s series on deteriorating bridges, David Zahn of FuelQuest explores how new tax collection procedures could lead to improved bridge maintenance.

In this video, the Massachusetts Dept. of Transportation explains how it speeded the repair  and replacement of 14 deteriorating bridges in that state. Much of the work was done on weekends, to reduce congestion and inconvenience for motorists.