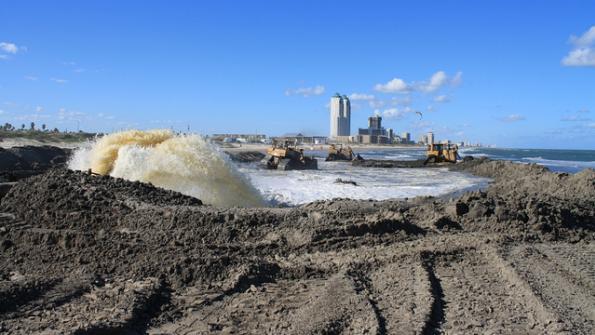 Beneficial Use to help erosion on Texas coast

The impact of tropical storms is a serious concern for coastal residents. One way that South Padre Island, Texas, protects its assets is through beaches, which not only fuel the local economy but serve as storm protection to residential property and critical city infrastructure.

Typically, along open coastlines, waves and currents along the shore move sand back and forth along a beach. This transport can be interrupted by natural barriers such as headlands, or man-made barriers such as jetties, at an inlet. The South Padre beaches, being down drift of the inlet, face erosion at an average rate of 5 to 10 feet per year, prompting local officials to pursue methods of returning sediment back to the beach.

According to a press release from architectural consulting firm HDR, this dredging project places sand from the entrance of Brazos Santiago Pass directly onto the city’s beaches and serves as a bypass system to transport material that would have been deposited on to South Padre had the channel and jetties not been constructed. The project serves to employ environmentally and economically responsible ways to use dredged materials to benefit local communities.