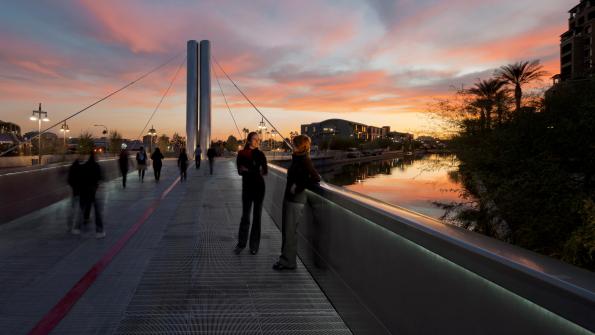 Art in the time of bankruptcy

As purse strings tighten, should arts programs get the ax?

In times of economic uncertainty, “unnecessary” programs like the arts are usually first on the chopping block. But during periods of municipal budget slashing, should art be the first casualty?

While the intangible benefits of the arts are numerous, Randy Cohen, vice president of research and policy at Americans for the Arts, reminds us that art is an industry – one that should not be written off because of budgetary shortfalls.

“Nationally, this is a $135 billion dollar industry,” Cohen says, adding that there are around 905,000 arts-centric businesses in America, making up about 4.4 percent of all businesses nationally. This means the arts employ about 2.2 percent of the national workforce. “On a pragmatic level, when we invest in the arts, we generate revenue,” Cohen says.

Scottsdale, Ariz. is one community where art has been made a top priority. Incorporated in the 1950s, the city was built by designers and artists, and that dedication to the arts has lead to prosperity, says Tim Rodgers, director of the Scottsdale Museum of Contemporary Art and the vice president of the Scottsdale Cultural Council.

Scottsdale has one of the highest concentrations of art galleries, per capita, in the nation. Most of tese galleries are located along the town’s historic main street, directly across from the Scottsdale Fashion Square, a retail space dedicated to high fashion. “This is the most highly visited area in Arizona,” Rodgers says. “Even more than the Grand Canyon.”

Artistic pursuits, be they visual, design or architectural, have been the driving economic force of Scottsdale since its inception, according to Rodgers. Because of this, he says, “Scottsdale is an anomaly,” one of the few population centers in Arizona to be thriving, economically. “This is, in part, due to the arts,” he says.

But are the arts needed?  Rodgers would say yes, but, “necessity is a tricky word,” he admits. “Art isn’t food or water, but when you ask what it means for people to truly prosper – what creates a full, happy, productive life, art factors in heavily.”

This is true of larger cities, too. Currently facing the largest municipal bankruptcy in American history, Detroit also is looking to the arts for cultural and economic relief. The approach, according to Michael O’Callaghan, executive vice president and chief operating officer of the Detroit Metro Convention and Visitors Bureau, is two fold: promoting tourism while attracting young innovators to revitalize Detroit’s economy.

One particular tourist destination, the Henry Ford Museum, is a tremendous economic engine, O’Callaghan says, adding, “the museum is the second most attended in the country, second only to the Smithsonian.”

Some 20 million people visit Detroit every year – of those visiting, a sizable portion will head to the museum, or attend another arts and cultural event. “The economic impact,” says O’Callaghan, “is significant.”

Cohen says Detroit’s draw is representative of a bigger trend. “The typical [arts and culture] attendee spends $24.60 beyond the cost of the event.” This may be shopping at local stores, going out to eat or grabbing a drink after the show. For non-locals, that figure climbs to around $40. “Vibrant arts scenes are good for local merchants.” Cohen says.

But for Detroit, it goes beyond tourism dollars, or getting locals out of their living rooms. O’Callaghan realizes a thriving arts culture is important in attracting the best and brightest – young, creative people that will help an economy grow through innovation. “In order to have such a community… you have to have the arts,” he says.

With this sentiment in mind, O’Callaghan says Dearborn, Mich., a suburb of the Motor City, has gone through a rebranding effort specifically designed to attract young innovators. Mayor Jack O’Reilly has actively pursued such individuals though efforts to keep creative spaces, such as studios and galleries, open.

O’Reilly’s office reports the city is attempting to bring Artspace, an urban revitalization project, which transforms historic or underused buildings into residential, retail and exhibit spaces, to the city. The details of that deal should be finalized by the end of this month.   Speaking in more universal terms, for both Detroit, and the nation as a whole, O’Callaghan says art is both a means and an end.

“Arts define your community,” he says. “If you don’t have that, what do you have?”

For more information on how arts can impact a community, watch American City & County's exculsive interview with Randy Cohen below.