Local governments have mobilized for leaf pickup (with related video)

As cities mobilize for leaf pickup, here is information on leaf-collection technology and processes.

The suburb uses a variety of technology to monitor leaf pickup, says Bill Grubaugh, Dublin’s director of streets and utilities. “We still track our day-to-day leaf collection progress using paper route listings with street indexes. We denote the exact time we completed each street next to the street listing. Most of our trucks have GPS units installed in them so we can track their progress through the city while collecting leaves.”

In Dublin, GPS is used to verify that city trucks were on a particular roadway at a specific time and date in the event that there was some sort of dispute or concern generated from a resident, Grubaugh told GPN.

“All work and costs for the leaf program is documented in CityWorks via a work order,” says Grubaugh.  “We track our program costs each year through reports generated from CityWorks.”

On the cost front, Dublin reported the following costs for the 2012 leaf collection season:

Grubaugh is hoping that 2013 leaf collection expenses “will be somewhere near the same costs” that the city paid in 2012.

To handle leaf collection, Dublin relies on several pieces of equipment. “We incorporate the use of five ODB (Old Dominion Brush) 30-yard self-contained leaf vacuum units pulled by our 2-ton dump trucks as well as four ODB pull-behind units for our narrower roadways in our residential areas. These are also pulled by our 2- and 2.5-ton dump trucks,” says Grubaugh. Go here for more information on Dublin, Ohio’s leaf pickup program.

In Fairview Park, Ohio, leaf collection ranks high as a municipal task. According to Fairview Park city hall watchers, not many years ago an incumbent mayor lost his reelection bid because voters got tired of seeing huge mounds of leaves on tree lawns when they filled out their November ballots. In that election year, heavy, wet snowfalls delayed and deterred leaf collection crews. (Full disclosure, the author used to cover Fairview Park city council meetings as a correspondent for the Cleveland Plain Dealer.)

“Mayor Eileen Patton is pretty adamant that we provide these services (leaf collection and disposal) for a safe and efficient community,” Berner said. “They are a naturally occurring phenomenon every year and you just have to deal with them.”

Equipment to get the job done 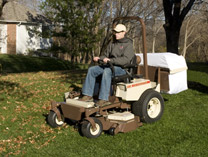 The force of the cutting blades discharges clippings and debris directly into the trash-ingesting steel impeller, reducing and compacting debris in the vacuum collector. The unit offers clog-free performance. In the photo, a PowerVac collection system, with a nylon mesh bag, handles leaf pickup.

In the video, a PowerVac collection system for Grasshopper True ZeroTurn mowers collects leaves and debris from turf.