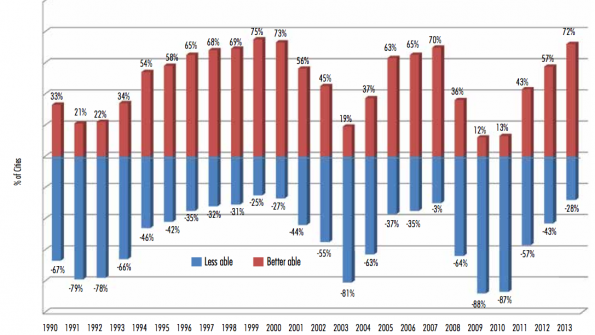 The National League of Cities' annual survey of financial officers indicated economic progress, albeit modest, during 2013.

In a webinar associated with the release of the report, NLC’s executive director Clarence Anthony reminded an audience of local government leaders that, “cities are the backbone of the American economy,” and that cities’ prosperities are essential to the health of the nation as a whole.

The report, which surveyed over 300 municipal finance officers across the country, found that overall, cities are better able to meet their financial needs in 2013 than they were last year. 72 percent of respondents reported greater financial security this year, according to the report.

Additionally, those polled project a small year-over-year increase in general fund revenues measured in inflation-adjusted dollars – the first such increase since 2006. Other key findings from the report include:

Reasons for the increased financial stability are manifold, but the NLC cites improvements in the housing market and increased consumer spending as two major factors.

Despite the growth, there are still elements plaguing cities’ finances. The report suggests that high levels of unemployment, long-term pension and health benefit obligations and recent uncertainty about state and federal actions have constrained municipal growth.

“We are increasingly concerned with the lack of progress,” Anthony said about the Federal Shutdown. He warned that federal actions could have “catastrophic implications” for local governments, especially with regard to credit ratings and borrowing powers.

Indeed, gridlock in Washington could hamstring the modest growth of the past few years, according to The New York Times. The outcome of the shutdown and the debt ceiling debate will have a major impact on cities’ financial momentum.

“Looking to 2014 and beyond, all indications point to improving conditions for city budgets, with national economic indicators pointing to continued slow growth,” according to the report. “External factors, however, could easily undermine cautiously optimistic projections…”