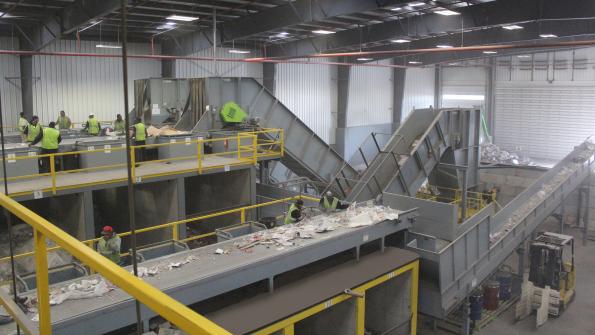 The Hamtramck, Mich., Recycling and Transfer Station drastically increased productivity through automation while cutting down on waste.

The new Hamtramck, Mich., Recycling and Transfer Station, which took the place of an outdated operation, has increased productivity fifty times over while cutting waste down to zero.

Hamtramck’s old facility was barely operational, but it did have the proper zoning and licensing from the city, state, and county to operate as a recycling facility. That was enough for some investors to see potential, according to program materials.

However, getting the station up to par was difficult. “They had no automated equipment to speak of,” Seth Krueger, president of the new facility, said in a statement. “The whole building was in disrepair, and it was a hazardous environment for the workers.”

Kruger was referring to the mountains of garbage, at times piled as high as 12 feet, on the pick-cycle line. “They pulled out the commodities that they could pick off the surface, but the rest was hauled away. It was just a mountain in there, and they never made much headway on that mountain,” said Krueger.

Kruger estimates the facility was recycling only two percent of what it took in. “The place was… missing opportunities,” he said.

The answer, according to program materials, was to start over. The existing structure was torn down and a new facility built in its place. American Recycler reports the new facility is 33,000 square feet, and almost completely automated.

“We got our final clearance from the Department of Environmental Quality in December, 2012, and we were cleared to accept waste,” Kruger said in a statement. “For the first few months we were doing test loads and getting our procedures tight as we ramp up to full production.”

The new facility has 12 conveyor systems, and recycles around 50 percent of the materials that come through its doors, according to American Recycler. Additionally, none of the material passing through the Hamtramck plant ends up in a landfill.

Residual, non-recycled waste is sent to the Detroit Renewable Power plant to be used as fuel, according to American Recycler. This cogeneration plant creates electricity and steam for downtown Detroit.   “We made a commitment to being landfill free.” Krueger said in a statement.