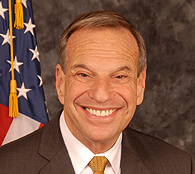 Shortly after the city counsel’s vote, Nicholas Pacilio, a spokesman for the California attorney general, confirmed that a criminal investigation against Filner is underway, but declined to elaborate, according to the Associated Press.

Speaking to the committee, Filner told members he “had no intention to be offensive… I have not sexually harassed anyone,” according to ABC News. “I was trying to establish personal relationships… I sincerely apologize to all of you… For the part that I have played, for putting the city through a difficult time, I  apologize.”

The council’s vote came after businesswoman Dianne York stepped forward, telling CNN that Filner put his hands on her buttocks during a photo opportunity following a meeting in May.

York is the 18th woman to accuse Filner of improper conduct. According to CNN, another woman accused Filner of giving her “tush a pat.” Another said Filner “put me in what I guess now is the famous headlock” and tried “to kiss me on the lips, and I’d have to squirm to get away.”

City Council President Todd Gloria will temporarily replace Filner, and a special election for a new mayor will be held within 90 days, in accordance with the city’s charter, ABC reports.

Although mitigation is ongoing, the city has made it clear it has no intention of allowing Filner to use taxpayer dollars to pay his legal fees. “The city of San Diego has sued the mayor with unanimous City Council approval,” City Attorney Jan Goldsmith said, according to ABC. “This is part of due process. If Bob Filner engaged in unlawful conduct and the city is held liable, he will have to reimburse us every penny the city pays and its attorney fees.”

Gloria Allred, legal counsel for Irene McCormack Jackson, one of the plaintiffs suing Filner, said that the suit has not yet been settled.  Allred also made clear she thinks the city should not provide any funds for Filner and suggested a public hearing on the matter. “There should be no payoff for Mayor Filner,” she told ABC.