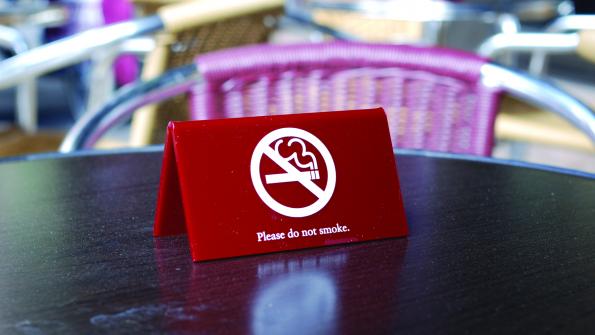 Outdoor smoking bans not backed up by science

More municipalities are banning outdoor smoking, but some experts say there is no evidence outdoor secondhand smoke is dangerous

Outdoor smoking bans have gained momentum throughout the county, but some experts are saying the main rationale for the bans, that outdoor secondhand smoke is dangerous, doesn’t have scientific evidence to support it.

Outdoor smoking bans have nearly doubled in the past five years, with nearly 2,600 outdoor venues prohibiting smoking, according to an Associated Press report.

But the medical evidence that second-hand smoke outdoors can harm passers-by is shaky, at best, according to some experts. Neil Klepeis, a Stanford University researcher whose work is often cited by antismoking advocates told the AP its “still up in the air,” and Ronaly Bayer, a Columbia University professor told the news agency, “The evidence of a risk to people in open-air settings is flimsy.”

The AP reports that the harmful effects of indoor second-hand smoke have been well established; however, few studies have been conducted on the dangers of outdoor smoke.  Effects have been largely extrapolated from indoor studies as reason for banning it outside.

“There’s no risk-free level of secondhand smoke,” Brian King, an expert on the issue for the Centers for Disease Control told the AP.

A recent study of about two dozen nonsmokers at a smoke filled outdoor dining area in Athens, Ga., confirmed significant amounts of cotinine in the non-smoker’s body according to the AP. Cotinine is produced when the human body metabolizes nicotine.

However James Repace, a Maryland-based scientist-consultant who designed the study, told the AP this isn’t necessarily a problem. The only people in danger, he said, are those with severe asthma and staff of outdoor patios where smoking is allowed.

UMass Amherst recently banned outdoor smoking on campus, to mixed reviews, according to a local television station, WWLP. Some felt it was a benefit to public health, while others thought the ban was pejorative.

“I don’t think that’s a good idea beacause its open air,” Jansu Dumus, a UMass student, told WWLP. “I mean, you can not really limit people not to smoke in open air.”

Others felt it helped the health of the student body. “During the school year, you can’t walk around here on campus without seeing like a million people,” Cassie Kazar, a UMass staff member, told the TV station. “So if you’re walking by a group of people who don’t smoke and you have that one smoker walking by they all get infested with it.”

Roger Montiel, an Atlanta park-goer, agrees that the unpleasant nature of cigarette smoke is enough to ban it in public places. He told the AP, “I don’t really like the smell and I don’t like it blowing in my face. If I’m enjoying a day at the park, I’d rather it not be part of that experience.”

For some, that is enough justification for the outdoor bans. “People don’t have to be dropping dead for you to regulate something.” Repace told the AP.