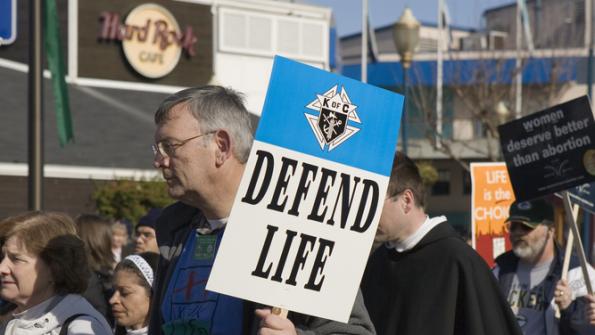 A recent Pew Research Center study found that while attitudes regarding abortion have not changed drastically on a national scale, regional divides on the issue are widening.

While a number of states recently have passed restrictions on abortion — including Texas, North Dakota and Arkansas — the Pew Research Center reports public opinion on abortion has remained relatively steady in the past 20 years. Its recent national survey of 1,480 adults found 54 percent say abortion should be legal in all or most cases while 40 percent say it should be illegal in all or most cases.

While national percentages have remained constant, Pew found the disparity in regional attitudes on abortion is widening. In the South Central region — including Alabama, Arkansas, Kentucky, Louisiana, Mississippi, Oklahoma, Tennessee and Texas — opposition to legal abortion “has significantly increased since the mid-1990s,” Pew says. Support for legal abortion remains the highest in New England, according to the report, and the gap between the two “has widened considerably over the past two decades.”

Pew reports there are indications the regional disparity may be widening over time, as opposition in the south has strengthened. In 1995 and 1996, polls conducted by the Washington Post/ABC found an 18-percentage point gap between support and opposition in New England and the South Central regions. That difference has nearly doubled to 35 percent in the past year-and-a-half, according to Pew.

According to the study, 13 states currently ban abortions past 22 weeks of pregnancy or earlier, with Texas prohibiting them after 20 weeks and North Dakota after 6 weeks.