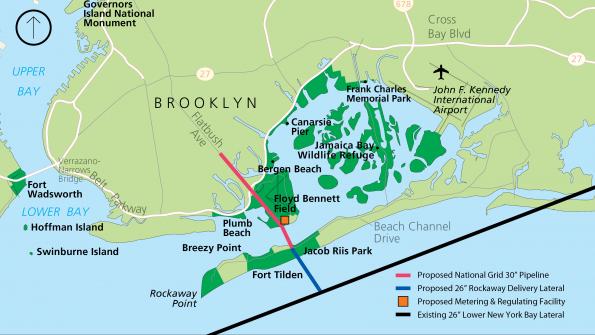 New natural gas pipelines are being constructed in New York to bolster the city’s energy infrastructure, but some groups fear the pipelines are too dangerous.

New York City is preparing its energy infrastructure for the future by building new pipelines to pump natural gas into dense urban centers, which are expected to grow exponentially in the coming years. However, some fear these pipelines are dangerous – bringing with them radon, a radioactive, carcinogenic gas, and the risk of explosions.

Queens, N.Y., based paper, the Times Ledger, reports that plans for a new conduit extending from the already existing Lower New York Bay Lateral Pipeline to southeastern Brooklyn has sparked protest, echoing concerns over the lower-west side of Manhattan’s contentious Spectra Pipeline – slated for completion this fall.

Currently, the Lower New York Bay Lateral Pipeline runs parallel to New York’s Rockaway Peninsula. The proposed expansion would be built in two parts, according to the Times Ledger. The first would branch off from the Lateral and run under Jacob Riis Park, the second would continue to pipeline up Flatbush Ave. in Brooklyn.

The energy company National Grid has begun construction on its portion of the pipeline, while Williams Transco awaits final approval for its part, according to the report.

The 3.2-mile conduit will increase the supply of natural gas to Brooklyn and Queens to keep up with increasing energy demands. “Think of it as a freeway,” Chris Stockton, representative for Transco, told the paper. “All it is is an exit ramp.”

But Jonathan Fluck, along with members of the Coalition Against the Rockaway Pipeline, thinks the dangers of the line outweigh potential benefits. Current plans have the pipe running under a national park and near a wildlife preserve. A leak, Fluck told the paper, puts both humans and endangered species at risk.

Stockton emphasized his organization’s commitment to safety, however, telling the paper, “Safety is in our DNA. It’s the most important thing we do.”

Since 2008, Transco has been issued federal corrective actions for issues in other states. Both corrections were issued after explosions along Transco's pipelines, according to the Times Ledger.

Occupy the Pipeline, a group opposing the Spectra energy pipeline, which is slated to begin pumping natural gas into Manhattan’s West Village in November, also cited safety concerns – specifically the risk of explosions and exposure to radon.

Both the Spectra Pipeline and the Rockaway Delivery Lateral will deliver natural gas extracted from the Marcellus Shale, a rock formation extending though parts of Pennsylvania, Ohio and West Virginia, known for its high levels of radon, according to Occupy the Pipeline.

“What it basically means is we’re going to have huge spikes in cancer rates,” Fluck told the Times Ledger. Stockton, however, countered these concerns with studies that show radon in the Spectra pipeline to be negligible.

Another concern for New Yorkers is the potential for an explosion. In 2012 there were 244 “significant incidents” of U.S. pipeline explosions that caused 10 fatalities and $180 million in property damage, The Huffington Post reports.

A natural gas pipeline similar in size to both the Spectra and Rockaway lines exploded in San Bruno, Calif., leveling 35 homes and killing 8.  The 2010 explosion created a crater 167 feet long and 40 feet deep. Such an explosion in Manhattan, according to The Village Voice, would be devastating.

"We talked to an expert, an engineer with substantial experience, who told us that at the top end, we could be looking at a crater and other damage that's close to a third of a mile in diameter," Derek Fanciullo, the assistant corporation counsel for the Jersey City Department of Law told The Village Voice. "[In Manhattan] we have 15,000 to 17,000 people living in a square mile. The human damage and the real property damage if this thing were to explode would be almost incalculable…”

But Spectra says concerns over safety are misguided. "Once complete, our project will provide safe, reliable natural gas which will reduce our nation's dependence on foreign energy sources," Spectra said in a statement to local Fox affiliate WNYW in New York. "Spectra Energy has an outstanding safety record and our new pipeline will meet or exceed all Federal safety requirements and regulations."

These regulations may be an issue, according to The Village Voice. The report states that oversight on such projects has been lax in the past, and the safety criteria established by the Federal Energy Regulatory Commission (FERC), the agency charged with approving interstate pipelines, may not be applicable for an area as densely populated as Manhattan.

Officials from Jersey City, N.J., the Sierra Club, Occupy the Pipeline and others are appealing FERC’s decision on the Spectra Pipeline, according to The Village Voice, and are working to block progress on the Rockaway project.