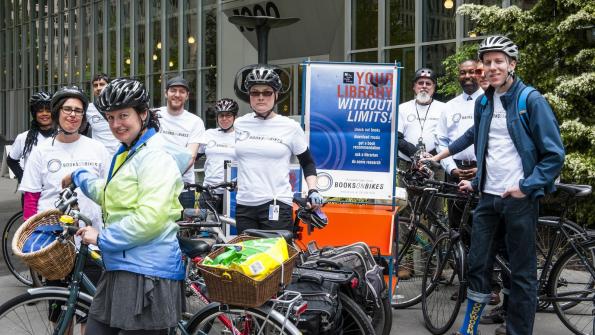 In Seattle, the library will now come to you

Voters in Seattle, Wash., fought to fund libraries and are now seeing the system revitalized. With new programs such as Books on Bikes, Seattle’s Library System hopes to reach residents in innovative ways.

During economic hardships, public libraries are one of the first programs on budgetary chopping blocks, forcing the organizations to invent new, cost-effective ways to reach patrons.

The Library Journal reports that across the country, libraries are dealing with branch closures and staff cuts. The Jacksonville, Fla., library network will lose $2.4 million under its current budget; Omaha, Neb., stands to lose $393,000, and Flint, Mich., will lose $275,000. Falls City, Ore., had to rely on a private donation to keep its doors open until the fall of 2013.

But not all libraries have a bleak outlook. Seattle, Wash., for example, was no exception to budgetary shortfalls. The Economist reports the city’s cuts have meant shorter hours and week-long “library vacations” in which all branches shut down.

With branch closures imminent, voters prioritized a $123 million, seven-year library levy in August, according to The Economist. The result, according to the report, has been a revitalization of the Seattle Public Library System, leading to innovative new programs such as Books on Bikes.

Created by Seattle librarian Jared Mills, the program involves 11 librarians riding bikes with specially made trailers to parks and events throughout the summer. The trailers in tow carry approximately 500 pounds of books, a large sign and a mobile Wi-Fi hotspot, according to The Economist.

Connecting with the public, especially those in underserved communities, is the main goal of the program, The Economist reports. By not limiting the library to its physical structure, Books on Bikes hopes to reach individuals it would never serve otherwise.   According to The Economist, at Books on Bikes' inaugural event, six of the 26 children present signed up for a library card. In addition, the children cleared out nearly every book onboard.

According to its website, the full-service Books on Bikes program will visit local parks and events throughout the summer. At the trailers, patrons will be able to:

The program’s website says the bike trailers were designed and constructed by local craftsman Colin Stevens, and are designed to handle the weight of materials as well as display books and other media on built in shelves. Trailers are also equipped with an umbrella holder in case of rain.

The Books on Bikes pilot program will run until October, at which time officials will decide if it should continue.