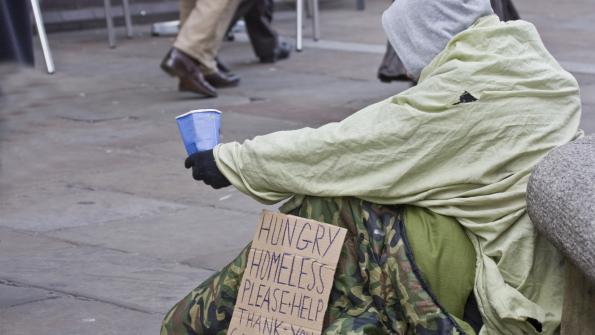 Washington, D.C., Mayor Vincent Gray recently announced a $100 million affordable housing initiative to further combat the problem of homeless veterans in his city. And D.C. is not alone in the fight. Recently awarded federal grants will be used in Iowa for job training purposes for homeless vets.

According to materials provided by the National League of Cities (NLC), D.C. has a smaller percentage of veterans (5.8 percent) than the national average (9.1 percent), but, as is the case with many cities in the nation, veterans in D.C. disproportionately struggle with homelessness, as compared to the general population.

According to the National Coalition for Homeless Veterans, homelessness is a complex issue, and the reasons for homelessness are myriad. However, a large number of veterans live with the effects of post-traumatic stress disorder and struggle with substance abuse issues, which are often compounded by a lack of familial or social support networks. In addition, military training is not always transferable to the civilian workforce, putting some veterans at a disadvantage when applying for jobs.

However, the NLC reports that moving forward, D.C. is committed to further reducing the overall homeless population, and is dedicating resources to meet the unique needs.

According to Gray’s 2013 State of the District Address delivered in February, since his inauguration nearly 1,500 affordable housing units have been built and ground was broken on nearly 1,700 more, but more must be done. Gray said in is speech, “…That’s why tonight I’m proposing a major affordable-housing initiative that will invest $100 million in building and preserving 10,000 units of affordable housing.  This investment, on top of our existing and other planned affordable housing investments, will go a long way towards ensuring we remain the type of compassionate, inclusive city we want to be.”

The Washington Post reports that the $100 million will come from the $417 million surplus for the fiscal year that ended Sept. 30. The housing pledge was among several major spending initiatives Gray suggested in the address, all of which were enabled by the expectation that revised revenue estimates will add hundreds of millions to the city’s coffers.

The City Council has already approved the supplemental FY 2013 and 2014 budget, which include the housing allotment, according to the NLC.  $83 million will go to the Districts Housing Production Trust Fund to aid in the development of affordable housing, and $2.2 million will go to the Housing First program, which provides permanent housing for chronically homeless individuals. The remaining funds will go to rapid re-housing programs, rental assistance and home ownership programs.

But D.C. isn’t the only locale working to decrease veteran homelessness. Iowa has been working to help homeless vets through job training programs.

Local organizations Shelter House and Goodwill of the Heartland will receive over $300,000 to help homeless veterans find and maintain employment from the U.S. Department of Labor’s Homeless Veterans Reintegration Program, according to the Iowa Press Citizen.

Unemployment is a major factor in veteran homelessness. The Iowa Press Citizen cites data from the U.S Bureau of Labor Statistics showing 7 percent of all American labor-force eligible veterans were unemployed last year, and veterans who served since 2001’s War on Terror have around a 10 percent unemployment rate.

The federal funding will be used to aid existing veterans’ programs, according to Kelli Hugo, vocational coordinator at Shelter House. “[Programs are] set up for the veterans to maintain long-term employment. We do a vocational assessment and coordinate employment services to assist veterans in reaching their goals — CNA certification, forklift, peer-support training, janitorial training,” Hugo told the Iowa Press Citizen.

Rep. Dave Loebsack (D-Iowa) announced the assistance grants in a news release June 19. “We have a moral obligation to serve those who have worn our country’s uniform with the same dignity and honor with which they have served our nation. Far too many veterans are struggling to find work and homelessness is far too prevalent amongst our veteran population,” he said in a statement.