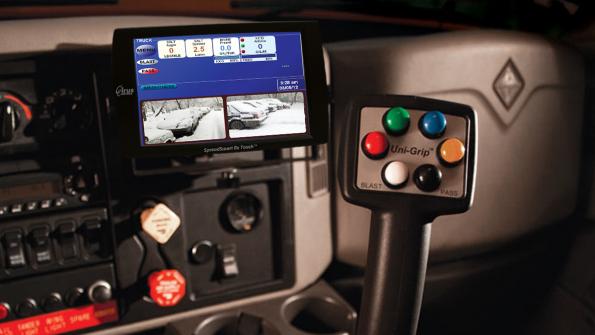 With more than 900 trucks, 24,000 lane-miles of highway and 35 snow events per season, Iowa Department of Transportation (IDOT) has one of the biggest and busiest snow-removal fleets in the country. In the course of an average winter, IDOT will spread more than 203,000 tons of rock salt and more than 15 million gallons of salt brine to control ice and snow on road surfaces.

The department recently finished upgrading the majority of its fleet with SpreadSmart Rx spreader controls, an action expected to reduce salt use by 10 percent and cut material expenditures by $2 million per year. IDOT is using the systems to ensure that materials are spread at the recommended pounds per lane-mile regardless of truck speed.

Prior to the spreader control systems being installed and calibrated, drivers were faced with the difficult task of visually determining how much salt to apply on each white, snowy stretch of road surface, which often led to overcompensation.

Annette Dunn is the winter operations administrator for IDOT and the person responsible for keeping the state’s highways clear of ice and snow. “With the new spreader systems,” Dunn says, “we can apply a variable amount of salt up to 300 pounds per lane-mile and use occasional blasts of 500 pounds per lane-mile on bridges. In some instances, operators can lay down even more materials. We think much of the department’s savings in materials will come from having the tools we need to better manage application rates.”

“We’re using the data to improve our effectiveness and efficiency on the road by reviewing performance measures such as the speed on a particular roadway in a particular kind of weather,” Dunn says. “Then, we will look at the type of treatments we’re doing and relate that information to highway accident data. This analysis will enable us to determine which treatments work best in certain types of conditions.”

Dunn said that 75 older trucks in the fleet without spreader controls will be replaced with new trucks by 2014 and also equipped with Spread Smart systems. That will make IDOT the most “connected” snow-removal fleets in the country, and perhaps one of the most effective as well.