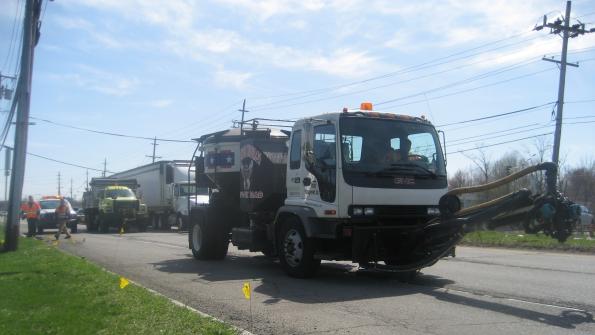 One worker operates the Pothole Killer from the truck cab. What resembles a video game console that adjoins the driver's seat enables the worker to maneuver a nozzle hanging from a mechanical arm jutting off the front of the vehicle. In a methodical process, the nozzle sprays a cementing and sealing substance, followed by stones and recycled rubber materials to patch the pothole.

According to a press release from the New Jersey Department of Transportation, which has leased and used the Pothole Killer since December, “The machines require fewer crew members to fill potholes compared to manual methods.” According to news reports, it costs about $35,000 a month to rent the machine.

This year has provided highway departments with an abundance of patch opportunities, says Craig R. Baclit, president of Patch Management Inc. “All along the Northeast coast (Va.-N.Y.) the 2013 winter has fluctuated dramatically, freezing overnight and warmer during the day with wet precipitation. We have seen areas where this weather pattern has caused significant damages to the road surfaces.”

It’s a constant process, Baclit told GPN. Road-patching isn’t just a winter or spring activity. “We perform our repair process all year. During the time of the year when potholes are not as active (May-October) we are performing pro-active preventative maintenance in preparation of the winter,” says Baclit.

Baclit says the cold can affect pothole repairs. “Generally during the winter, when potholes develop (because of the freezing and thawing) you either have cold patch (which is known to fail) or you have our heated spray injection application, that has an 87 percent success rate when compared to the other applications that are used.”

Baclit says his is a pro-active environmentally responsible company. “We’ve gone green, and despite the industry approach to pothole repairs, our process is completely friendly to the environment.” The material used in the patch process is called Patch Plus, and is a recyclable emulsion that the company blends.